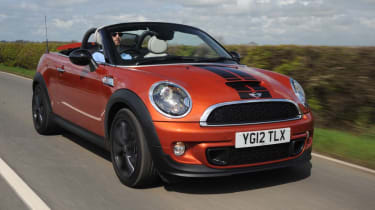 6
Open-top two-seater sports cars are a British obsession, so it’s no surprise that MINI has chosen to add a more focused soft-top to its rapidly expanding range, alongside the cabrio. The Roadster promises to breathe new life into a market that has long been dominated by just one car: the Mazda MX-5.
The newcomer is based on the recently launched Coupé, and shares the same steeply raked windscreen, short rear overhang, gaping bonnet scoop and twin exhausts. Yet in place of the tin-top version’s ungainly roof is a neat fabric soft-top. Pull a catch on the top of the windscreen, press a button and it stows below the window line in 10 seconds, revealing a pair of eye-catching roll hoops. Interestingly, the Roadster will be sold with a manual roof in all markets but the UK, yet the electric mechanism works at up to 20mph.
Bold details like the pop-up rear spoiler and contrasting body stripes ensure the Roadster attracts lots of attention on the road, although the extrovert styling won’t suit all tastes. Our test model came with the £1,975 Chili pack, which brings larger 17-inch alloys and front foglights; the Mazda gets both as standard. Inside is the same retro-styled layout and sturdy finish as found in all modern MINIs, but again the Roadster can’t match the Mazda’s generous standard spec, with leather, climate control and even Bluetooth all costly extras.
One big advantage the MINI does have, though, is space. Despite the compact exterior dimensions, the interior is roomier and more flexible. There’s a handy shelf behind the front seats for luggage, while the boot has nearly 100 litres more carrying capacity than the MX-5’s, at 240 litres. Plus, there’s a ski hatch to help you carry any long or awkward items.
While this practicality is impressive, roadster buyers will be more interested in driving fun. The Roadster has the same eager, nimble front-wheel-drive chassis as all other MINIs, so is a blast on twisting back roads. The body has been stiffened behind the seats to make it more rigid and the lack of body roll means the car corners with real precision.
What’s more, the six-speed manual box is nearly as accurate as the Mazda’s, and quick downshifts are accompanied by a pleasing crackle from the exhausts. Press the Sport button, and artificial weight is added to the steering and throttle response sharpened.
Not that the Roadster needs much help when it comes to performance, as its 181bhp 1.6-litre engine easily outgunned the MX-5 at the track. The MINI recorded faster times in every single one of our acceleration tests thanks to its superior torque figure, with 260Nm available from just 1,700rpm.
The trouble is, on the road it struggles to make this advantage count. Firm suspension means the car feels less fluid than the MX-5 on bumpy roads, and the steering wheel tugs at your hands as the front tyres follow the camber of the road. These excitable dynamics quickly become tiresome on long journeys, although with the roof up the MINI is more refined.
The Roadster also has fuel-saving tech like stop-start, but our test return of 30.8mpg is a long way off MINI’s 47.1mpg official figure – although it still trumped the MX-5 by 5.9mpg.
Even so, CO2 emissions of 139g/km mean the MINI sits four tax bands lower than the Mazda, plus a free servicing offer and strong residuals make it a wise investment. So on paper, the Roadster holds all the aces – but does it do enough to trump our class leader?