Two-seater roadster is the established class leader. But is it under threat here? 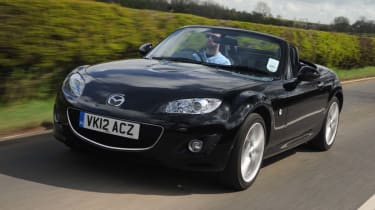 6
What’s left to say about one of the best-selling sports cars of all time? Over the past two decades, numerous rivals have tried to challenge Mazda’s iconic MX-5, but it still remains the roadster benchmark.
On the outside at least, the Mazda wears its old age surprisingly well. Its classic sixties proportions – with a long, low bonnet and stubby tail – have survived almost untouched since the original went on sale in 1989, but its simple design still looks sleek and stylish.
The Mazda is longer than the MINI and the top of the roof sits 145mm lower, which gives the car a more purposeful stance. Sport Tech models get 17-inch alloys, front foglights and a wind deflector as standard – all of this will cost you extra in the MINI. The MX-5 also gets heated seats and a powerful BOSE stereo; both essential for anyone planning to get the roof down all year round.
The car in our pictures is a Roadster Coupé, which features a powered hard-top. We tested a soft-top, and although it does without the MINI’s electric operation, the simple manual roof can be raised or lowered in seconds.
Once you’ve lowered yourself into the Mazda’s cabin, it starts to show its age. The grey plastic dashboard and upright centre console are functional and easy to use, but despite creature comforts like climate control and leather trim it feels basic next to the MINI.
And although it’s longer than the Roadster overall, the MX-5 has a shorter wheelbase, and is cramped inside as a result. There’s no space at all behind the seats for coats, and even the door pockets are simple elastic nets rather than proper storage bins.
This tight packaging also means the boot is 90 litres smaller than the Roadster’s – and the narrow opening limits what you can carry. Fortunately, the standard driving position is superb and visibility in the Mazda is better than in the MINI whether the roof is up or down, making the MX-5 driving experience even more enjoyable.
However, it trailed the MINI at the test track. While the 2.0-litre engine makes a fantastic noise, it only really gets into its stride above 5,000rpm. This lack of low-down grunt was telling in our in-gear tests: the Mazda was four seconds slower from 50-70mph in sixth, with a time of 10.7 seconds.
Yet on the road, the MX-5 rarely feels like it is lacking in performance. The balanced rear-drive chassis is as exciting as ever, and despite some initial body movement, it’s grippy and adjustable in corners. The supple ride is more forgiving than the stiffer MINI’s, too.
But the brilliant dynamics still demand sacrifices. For example, the Mazda returned 24.9mpg in our hands, and all the ownership costs – from servicing to tax and depreciation – are higher. Yet many buyers will be willing to overlook this in a car that’s unlikely to rack up high annual mileages.

Chart position: 1WHY: Few sports cars ever attain legendary status like the MX-5. With its mix of rear-drive handling and wind-in-the-hair fun, it’s the default small roadster choice.