Can the new MINI Roadster topple the class-leading Mazda MX-5? Our first test has all the answers... 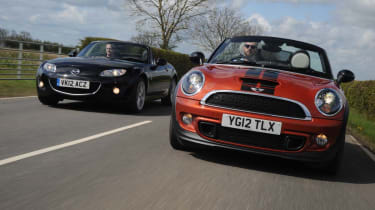 We’ve been waiting years for a sporty soft-top to challenge Mazda’s all-conquering MX-5. Is the MINI Roadster the car to do it?
The newcomer is the first open-top two-seater in the company’s history, and uses the same simple formula that’s made the Mazda such a phenomenal sales success. The two cars share a lightweight body, compact interior, small-capacity engine and affordable running costs.
What’s more, MINI’s pricing strategy puts this £21,020 Cooper S Roadster within a few hundred pounds of Mazda’s 2.0-litre soft-top – so the British-built model has a great chance of breaking the MX-5’s stranglehold on the affordable sports car market.
However, the Roadster takes a different approach to delivering the driving thrills that are so important to buyers in this class. MINI has a proven track record of producing exciting hot hatches, but can the turbocharged, front-wheel-drive Roadster really challenge the traditional rear-drive MX-5 for fun? We find out in what promises to be an extremely close encounter.

The MINI Roadster was always going to struggle to knock the MX-5 off the top of the roadster tree –and unfortunately, it isn’t quite up to the challenge.

While it has a broad range of talents and very impressive straight-line performance, the MINI can’t quite conceal its hatchback underpinnings. Ultimately, it lacks the instant driver involvement that makes the Mazda such a compelling choice.

However, the margin of victory is very small, and the ageing MX-5 struggles to keep up in a number of key areas. Many buyers will be drawn by the MINI’s glitzy design, spacious boot and efficient engine. But on the road, its harsh ride and torque steer disappoint.

Another deciding factor is price. Although the Roadster appears cheaper and should cost less to run, it’s not especially good value. If you specify all the kit that’s standard on the MX-5, the Roadster will work out £2,840 more expensive – and that’s before you add sat-nav or any of MINI’s eye-catching features.

What’s more, adding all these options goes against the less-is-more philosophy that has made the Mazda such a tremendous success. Our fully specced Cooper S test car is £26,940 – closer in price to the bigger and more upmarket Audi TT than the pure and simple Mazda. After 20 years at the top, the MX-5 shows no sign of slowing down.

With its simple recipe of rear-wheel drive and a low kerbweight, the Mazda retains its crown. But it won’t suit all with its limited practicality. Most buyers will be able to put up with the high running costs due to the thrilling dynamics and generous kit, though, and if you want a fun two-seater roadster, the MX-5 still has the edge.

The Roadster falls agonisingly short of victory on its road test debut. It’s the best soft-top MINI, and has the edge over the Mazda for running costs and practicality. Performance is great, too, and it’s nearly as agile as its rival in corners. But the stiff ride means it’s tiring over longer distances and the lengthy options list can make it expensive.