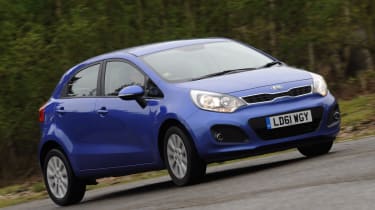 8
While the Fiesta has been a Peugeot rival since the days of the 205, Kia has only recently established itself as a front-running contender in the supermini class.
But the neat proportions and up-to-date looks of the impressive Rio mean it easily has enough kerb appeal to rival the new 208.
Get behind the wheel and the good news continues. The cabin design isn’t as fun as the Fiesta’s or as upmarket as the Peugeot’s, but the layout is functional and the driving position comfortable. The straightforward stereo is easy to use and the Kia’s clear instruments were refreshing after we struggled to see the dials in the 208.
Style hasn’t been totally forgotten, though: the rotary air-conditioning controls, chunky rocker switches and multifunction wheel are smart touches that add an upmarket feel.And the Rio’s quality is as good as in rivals.
There’s lots of cabin stowage, with a huge glovebox and large door pockets, while passenger comfort is boosted by a near-flat rear floor, improving footroom for the middle seat occupant. Legroom is great and the 288-litre boot is nearly as big as the Fiesta’s.
The Kia is the biggest car overall and boasts the longest wheelbase, so it’s no surprise to find it feels the most spacious inside. More unexpected is the way it drives. It’s relaxed and easy to manoeuvre in town, but there’s also a lot to like about the handling once you reach faster, more challenging roads.
Body roll is well contained and there’s decent grip. Yet while it gets the basics spot-on, the Rio fails to deliver the extra sparkle that separates adequate cars from class leaders like the Fiesta. Drive it back-to-back with the Ford and you realise the Kia’s light electric power-steering lacks precision and feel at higher speeds, while the shift action of its five-speed box is a little vague.
However, these are small annoyances and far from deal-breakers. Our biggest criticism concerns ride quality – while the car feels fine on smooth surfaces, rough tarmac upsets its composure. As with the Peugeot, the Kia’s suspension thuds into potholes, but although the 208 is hushed on the motorway, the Rio struggles to cope with harsh surfaces at speed.
Under the bonnet, the 1.2-litre petrol engine lacks the eager character of the Peugeot’s, but a healthy 121Nm torque output helps it run the Fiesta close in mid-range acceleration. Slightly hesitant throttle response means it still feels a little flat when accelerating, though.
An excellent seven-year warranty, fixed-price servicing and the lowest list price on this test all add to the Kia’s appeal, while standard equipment includes power- folding mirrors, electric windows all round and Bluetooth phone connectivity.
So, the great-value, roomy, well built and very sensible Rio deserves recognition as one of the best buys in the supermini class. But is it good enough to win here?

Chart position: 3WHY: Well equipped, stylish and solidly built, the Rio is another example of just how far Kia has come in the past few years.