In its first test, the all-new Peugeot 208 meets class leaders from Ford and Kia 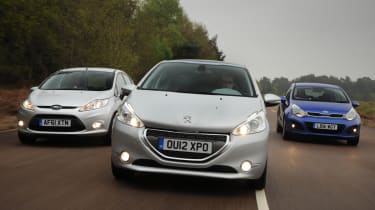 Before the 205, Peugeot wasn’t known for its small cars, but in 1983 the legendary hatch put the company firmly on the supermini map. Nearly three decades later, Peugeot claims it has “regenerated” the principles of the chic 205 to create the 208, which it hopes will return it to the top of the class.
To find out if the newcomer is up to the task, we’ve got our hands on one of the first left-hand-drive cars off the assembly line. The range is extensive – there are five petrol engines and three diesels, plus five trim levels. We test a mid-spec £12,795 Active with Peugeot’s new 1.2-litre three-cylinder petrol engine.
The supermini sector is one of the most fiercely fought, so the 208 faces some tough rivals. The Ford Fiesta is our current class favourite, with its sleek styling, sharp chassis and practical cabin, while Kia’s Rio is also a formidable opponent, combining distinctive looks, generous kit and an excellent aftersales package.
So is 208 going to be a magic number for Peugeot? Or will this crucial new supermini simply not add up against such talented opposition?

The supermini sector is the most competitive there is, and it’s packed with top-class contenders. Now you can add the Peugeot 208 to that list.

With its sleeks looks, classy cabin and brilliant new engine, the car recaptures the spirit of its famous 205 ancestor. The question is, is it good enough to beat two of the best in the business?

Well, it certainly edges the Kia. While the Rio is handsome, practical and well equipped – and backed by the brand’s excellent seven-year warranty – its ride is too firm. Plus, the 1.25-litre engine is the weakest in the Rio line-up.

If you value driving thrills, the Ford Fiesta is still the car to beat. It’s also a good-looking, roomy and refined choice. But the car costs more to buy, is more expensive to run and will have lost more of its value come trade-in time – and for most supermini buyers that will be the clincher.

So by the very narrowest of margins, the 208 snatches the win. It’s not perfect, though. Other engines in the line-up aren’t as convincing as the 1.2-litre, while the ride and handling fall short of the best. But its stylish exterior, upmarket cabin and low running costs are hard to ignore.

Peugeot should savour this win while it can, as a heavily revised Fiesta is due in September.

The stylish new 208 marks a return to form for Peugeot. The car looks good, has a smart cabin and provides low running costs. However, it’s certainly not as much fun to drive as the Ford, and other engines in the line-up aren’t as good as the new three-cylinder.

It has ruled the supermini roost for four years now, but the Fiesta has finally suffered a road test defeat. Although it’s still superb to drive, it’s the most expensive of our three cars to buy and run. Plus, it has the worst predicted residual value. The facelifted model can’t come soon enough.

Despite its third-place finish, the Kia would still be a good choice. Smart looks, a well equipped cabin and an excellent aftersales package mark the Rio out. However, the 1.25-litre engine is the weakest in the range and the ride is too hard.