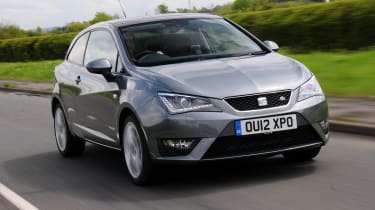 8
The Ibiza has been a landmark car for SEAT, with more than four million sold since the original made its debut in 1984. The stylish supermini embodies the youthful spirit and sporty nature of the Spanish company, but after four years on sale, the current fourth-generation model is starting to show its age.
So to make sure the success story continues, SEAT has given the Ibiza a well earned mid-life refresh. While the angular lines of the outgoing car still look superb, the new version has been subtly sharpened up to incorporate the latest family design cues.
The narrower grille is borrowed from the Alhambra, while the flared headlight clusters and prominent central bonnet crease are inspired by the Toledo concept which appeared at the Geneva Motor Show back in March.
To further spice up the exterior, this range-topping FR version comes with lowered sports suspension, 16-inch wheels and twin exhausts. While these racy touches make the Ibiza look more purposeful and aggressive than before, it lacks the instant visual impact of the chic DS3.
Details like our test car’s classy £765 xenon headlamps and LED running strips and £150 17-inch wheels are only available as options, and without them it’s harder to tell the new Ibiza apart from its predecessor.
Inside the changes are less obvious, but the new three-spoke steering wheel and clearer dials do make a surprisingly big difference from the driver’s seat. Welcome new additions like the bigger glovebox and simplified climate controls make the Ibiza easier to live with, yet our reservations about the interior remain. While the FR gets special badges, sports seats and glossy trim and leather on the steering wheel and gear selector, overall the cabin still doesn’t look nearly as special as the DS3’s, and some of the plastics feel cheap.
Other issues such as the confusing radio controls could easily have been addressed, but later this year the Ibiza will be available with the SEAT Portable System from the Mii city car, which combines touchscreen sat-nav, audio and Bluetooth connectivity.
It’s easy to find the perfect driving position in the Ibiza and all-round visibility is excellent, although passengers travelling in the back won’t find things quite so comfortable. The Citroen and SEAT provide a decent amount of legroom, but the lack of headroom in the three-door SC means that taller passengers will struggle to relax. Most of the Ibiza range comes with a 284-litre boot (which is actually bigger than the DS3’s), yet in the fastest FR petrol and diesel models this shrinks to 266 litres because the battery is relocated to the boot, where it eats into load space.
Practicality isn’t likely to be a major factor for sporty supermini buyers, although keen performance definitely is, and the Ibiza starts to recover lost ground at the track. Despite producing less power and weighing 89kg more than the Citroen, it held a narrow advantage over the DS3 in all of our in-gear tests.
This is largely down to the SEAT’s standard seven-speed dual-clutch DSG box, which has shorter gearing. In fact, the rapid gearshifts and eagerness to kick down under hard acceleration make the car feel a little manic on the road – a sensation enhanced by the vocal exhaust note. This straight-line speed isn’t complemented by a balanced chassis, and the Ibiza struggles to keep up with the DS3 through corners.
Although it has a clever electronic XDS limited slip differential and lowered suspension, the front tyres lose grip easily. And while the steering is accurate, it provides little feedback to the driver. The FR also gets beefier brakes than the standard car, but they lack the instant bite of the DS3’s discs.
At motorway speeds the Ibiza’s ride is bouncy and unsettled, and wind and road noise are both more noticeable than in the Citroen. Having a tall seventh gear did mean that the SEAT was more economical over our varied test route, but a difference of only 1mpg is unlikely to affect most buyers’ monthly fuel bills.
The other costs are split quite evenly, but the Ibiza does have stronger residual values and a lower list price. Will that be enough to tip the scales in its favour?

Chart position: 2WHY: A mid-life facelift means the 2012 Ibiza is better looking then ever, and with a punchy 1.4-litre TSI engine and slick DSG twin-clutch gearbox, it should drive well.