Does the new SEAT Ibiza FR have what it takes to leave Citroen DS3 trailing? 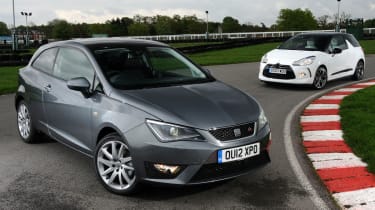 Sporty superminis are hardly in short supply, but SEAT’s stylish Ibiza has always stood out from the crowd, and now a new version is here to keep it on track for sales success.
Recently it has been the Alhambra MPV that has been picking up all the awards, but the Ibiza is still the heart and soul of SEAT’s range. It made up nearly two-thirds of the brand’s UK sales last year, and this three-door Sport Coupé version is the most popular bodystyle.
To underline its sporty credentials, we’re testing the flagship petrol model in aggressive FR trim. With a 148bhp 1.4-litre turbo and a slick DSG gearbox, it has enough performance to worry any warm hatch, and styling tweaks include bigger wheels and chrome exhausts.
But the Citroen DS3 DSport will provide a stern test. With eye-catching styling and a turbocharged engine from MINI, it’s a tempting proposition. Which one of our hot hatches will be celebrating with a lap of honour?

Both these superminis set pulses racing, with aggressive styling and hot hatch performance from their turbocharged engines. Yet when the chequered flag falls there can only be one winner – and it’s the DS3 that crosses the line just in front.

All the changes SEAT has made to the Ibiza are positive steps forward, and the new lower price means that it remains the affordable choice for anyone seeking an accessible junior hot hatch. The revised styling helps it stand out compared to mainstream rivals like the Ford Fiesta and VW Polo, even if it can’t quite match the DS3 for visual appeal.

After the exciting exterior, the Ibiza’s interior still feels underwhelming, though, and while the boot is a decent size, the limited rear space makes the car less flexible than the taller, better equipped Citroen.

In isolation, the Ibiza delivers surprisingly brisk performance, too, but it comes unstuck when faced with the superior agility and greater involvement of the DS3. The SEAT feels like a souped-up supermini rather than a genuine hot hatch, and its case is further weakened by the lack of cruising refinement and jittery low-speed ride.

If the Ibiza was offered with a manual box, this result could have been much closer – but ultimately it can’t beat the Citroen for driving fun or desirability.

Last year’s updates gave the DS3’s engine more power and improved fuel economy, and help the car to win this test. It feels that little bit more special to look at, sit in and drive than the SEAT – and the supple ride and well equipped cabin ensure it’s the more usable everyday car. And although it costs more than the Ibiza in DSport trim, it’s worth every extra penny.

Great looks and a low price make Ibiza tempting, but it never quite delivers on the promise of its racy styling. The smooth DSG gearbox and numb steering mean it can’t match the Citroen’s driving thrills. The cramped rear and plain dash are beginning to show their age. And if you add extras to match the DS3’s generous kit count, the SEAT is the costlier choice.