Peugeot has revised its 2008 to keep it standing tall with the small crossovers. Can it see off the Ford EcoSport and Citroen C4 Cactus? 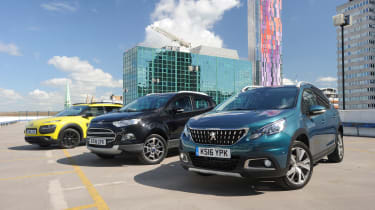 Peugeot embraced the small crossover boom when it launched the 2008 in 2013. At the time, it marked a new direction for the brand’s practical small cars, because it essentially replaced the 207 SW small estate.

And it turned out to be a smart move, as the 2008 has proven very popular over the years. However, seeing as the 208 was given a recent facelift, Peugeot has also updated the 2008 with a new family look and revised trim line-up. Is it enough to keep the 2008 near the top of the small crossover pile?

Is it enough to keep the 2008 near the top of the small crossover pile? To find out, we’ve lined up a pair of very different rivals.

First up is the Ford EcoSport. This car got off to a rough start when it was originally launched, but Ford has given its small crossover a makeover to boost its appeal. Has it done enough to keep up with the latest Peugeot, though?

At the other end of the scale is the Citroen C4 Cactus. It shares some of its running gear with the 2008, but is very different in concept, with clever design touches inside and out, and more hatchback-like dimensions. 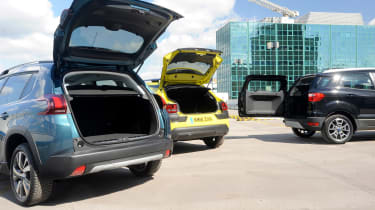 Despite their different dimensions, the Peugeot and Citroen offer similar luggage space, at 360 and 358 litres respectively. Both cars are ahead of the Ford, which provides 355 litres and is harder to access thanks to the side-hinged boot door. Back seat space is tight in the EcoSport, while the C4 has more rear room than the 2008. 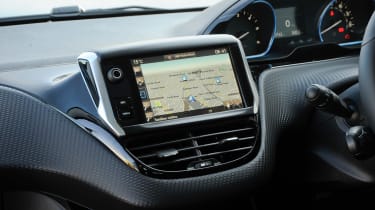 The C4 Cactus is £405 cheaper to buy than the 2008, but comes with nav and a reversing camera as standard. While the Ford is cheaper still, adding nav, DAB radio, rear parking sensors and a camera all but eliminates the saving over its rivals here. Plus, it will cost more to run. 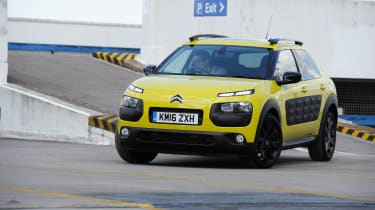 With CO2 emissions of 95g/km, the Citroen is the cleanest car here, but the 2008 isn’t far behind, at 97g/km. The C4’s lower list price makes it the cheaper company car, while both models are well ahead of the relatively dirty 115g/km Ford. 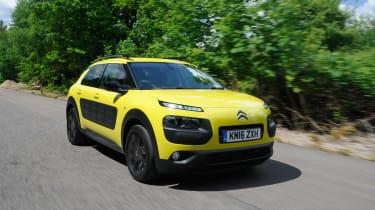 The C4 Cactus manages to inject a shot of quirkiness into the crossover class. The looks won't be to all tastes, but there are no arguments about its efficiency and interior space - which are narrowly better than the 2008's - plus it's fast enough and has plenty of family friendly features on board. Add in a long kit list and a great-value price, and the Citroen is even more appealing. 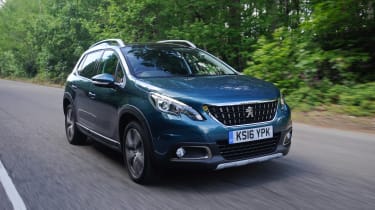 While the 2008's looks have been revised, not a lot else has changed. That's no bad thing, as this is one of the better small crossovers on the market thanks to its classy cabin finish, spacious boot and decent kit list. The Grip Control system is a reasonable compromise in place of four-wheel drive, but the higher price tag means the Peugeot comes second here. 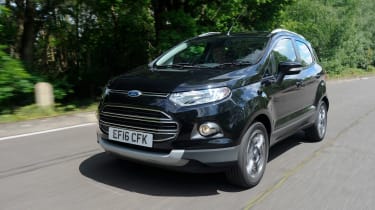 There's no doubt that the EcoSport has been improved, but it's not enough to make it a contender against such accomplished rivals as the Citroen and Peugeot. While the 1.5 TDCi is smooth and the gearbox is good, the car lags behind for driving dynamics, plus the low price can't make up for the shorter kit list and higher running costs you'll have to put up with. 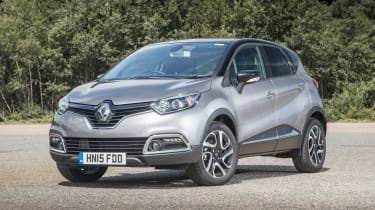 The Captur is well worth a look, as although it can't match the 2008 for quality or performance, it has personalisation on its side, while low running costs are guaranteed. Factor in Renault's strong dealer service and four-year warranty, and it's a genuine contender. 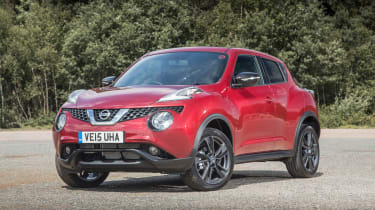 Nissan's Juke shares its running gear with the Capturm, but it only comes with the higher-powered version of the 1.5 dCi diesel. N-Connecta trim features plenty of kit to justify its higher price, but its looks are divisive and it's not as spacious as the Captur, let alone the 2008.