Insurance is one of the biggest single costs faced by any motorist, meaning many makers have gone down the route of offering free cover to tempt customers into showrooms. It's a policy that has been especially successful among younger buyers, whose premiums are steeper than most. 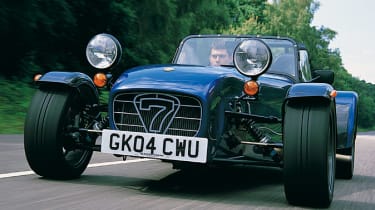 For young drivers, this has to be the ultimate free insurance deal. The finance isn't the cheapest and the policy will, of course, have to be renewed out of the owner's pocket after 12 months - but the Sprint offers accessible entry into one of the most thrilling sectors of the British sports car market.

Insurance is one of the biggest single costs faced by any motorist, meaning many makers have gone down the route of offering free cover to tempt customers into showrooms. It's a policy that has been especially successful among younger buyers, whose premiums are steeper than most.

These days, lots of superminis have 12 months' cover included in the price. But there's now a more sporty alternative, it's available to drivers as young as 21 and it's not even a hot hatch - meet the all-new Caterham Sprint.

The British firm has come up with a package tailor-made for young buyers, plus more established customers. It may still be out of your average student's reach, but the iconic Seven is now accessible to a raft of youthful enthusiasts.

Called the Sprint, the newcomer is £19,950 and is offered with a finance deal that weighs in at £299.40 a month - making a Caterham genuinely affordable for the first time. So what do you get for the money (apart from the free insurance)? The car is basically a Seven Classic with parts added from the awesome Superlight range to make it appealing to young drivers and affordable to run. Under the bonnet is a modest 1.4-litre K Series Rover engine that delivers an equally unassuming 105bhp.

But as soon as you turn the key, you know Caterham hasn't lost sight of what its sports car is all about. The loud burble from the side-exit exhaust only adds to the excitement of levering yourself into the tiny driver's seat, and the performance is surprisingly gutsy.

Caterham claims a 0-60mph time of 6.5 seconds, and while the pace is impressive, it's not intimidating in the same way as in the tuned Superlight. The good news is that Sprint owners get the racy suspension from costlier Sevens - so the handling and steering deliver sensory overload on any road.

Caterham has anticipated problems with inexperienced drivers - who without free insurance would never have considered the brand - being let loose in what is a seriously focused sports car. So as part of the terms and conditions of the year's free insurance, buyers are sent on a compulsory driver training programme, which is included in the price.

We think that's crucial, as this car is thrilling, but can easily catch out the unwary. The Seven Sprint is thoroughly exhilarating - no matter how old you are.