Chevrolet Colorado pick-up unveiled, but unlikely to go on sale in the UK 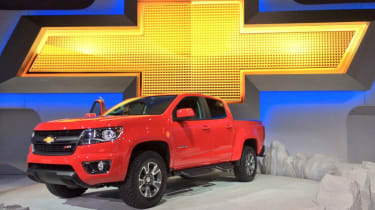 The Chevrolet Colorado pick-up has been unveiled at the Los Angeles Motor Show. It may be pretty big by UK standards but Chevrolet is calling the Colorado a mid-size pick-up, though it admits the majority of US buyers are after full-size trucks.

"Our strategy is simple: meet the needs of the broadest possible customer base, and let them choose precisely the right truck to meet their needs," said Mark Reuss, GM president of North America. "The all-new Colorado benefits from the solid foundation established by the Silverado, and it reinvents the midsize truck, while reinvigorating the segment at the same time."

The Colorado is offered with two engines; a 190bhp 2.5-litre inline four-cylinder and a 298bhp 3.6-litre V6. Chevrolet says that’s enough to make the Colorado the most powerful truck in its class. And it’ll have to be if it’s to live up to Chevrolet’s claims that it can tow more than three tonnes. There’s also a 2.8-litre diesel offered, which is unique for this class of truck.

There are plenty of car-like creature comforts on offer, too, like an eight-inch colour touchscreen, rear view cameras and lane departure warning. Kit obviously depends on which trim level you opt for, with WT, LT and Z71 options available. On top of that there are two-wheel-drive or four-wheel-drive variants.

Don’t expect to see the Colorado on sale in the UK any time soon. It’s probably a little too big for our roads anyway, especially when you consider the 41-feet turning circle is touted as a positive by Chevrolet.