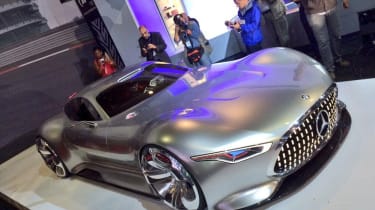 There were a wide range of new cars on display at the LA Motor Show, including the new BMW 4 Series Convertible, new MINI, Mercedes S65 AMG and the eagerly-awaited Porsche Macan.

To help keep everything in one place we've created this handy round-up to guide you through all the new metal and crazy concepts that were at the show, along with links to in-depth articles about each new model we saw.

Audi's supercar-SUV Nanuk Concept was the sole entry in the show for the German giant. The Frankfurt Motor Show 2013 was the public debut for the car, which features a 5.0-litre twin-turbocharged V10 TDi diesel engine producing 536hp and 1,000Nm of torque. The Nanuk is unlikely to get anywhere close to production, but if something like this comes out it looks likely to fill a completely new niche.

The BMW X4 also made an appearance at the LA Motor Show. It's set to go on sale early next year with a price tag of around £30,000 and an engine range which will be shared with the BMW X3.

BMW's first electric cars, the i3 and the i8, were also on display at the LA Motor Show after their world debut at Frankfurt.

The Cadillac Escalade was on show in LA and like its predecssor it will be available in long wheelbase from. Only one engine will be availale from launch, a 420bhp 6.2-litre V8, which will be mated with a six-speed automatic gearbox. Pricing and spec information will be announced closer to the car's released date early next year.

Cadillac also showcased its new two-door, four-seat Elmiraj concept. The Elmiraj gives us an insight in to the future design direction of the brand's luxury models, however, Cadillac has not confirmed whether the Elmiraj is a preview to a new model.

The new Ford Edge Concept was unveiled at the LA Motor Show, a thinly-veiled production model that we should see in Europe during 2015. It’ll be part of a family of Ford SUVs ranging from the Fiesta-based EcoSport, through the Focus-based Kuga and capped off by the Mondeo-based Edge.

Honda revealed the FCEV concept at LA, which is a preview to a next-generation fuel-cell electric vehicle. Honda plans to launch the FCEV in Japan and America in 2015, with sales in Europe following after.

Due to the time difference, the stunning Jaguar F-Type Coupe had already been unveiled at the Tokyo Motor Show, but the svelte coupe was also on display at the LA show too.

Land Rover has revealed a long wheelbase (LWB) version of the new Range Rover. Little has changed over the standard model other than a 15cm increase in length, which makes for increased interior space for rear passengers.

We’ve kept you well up to date with the new MINI and the third-generation model will finally be unveiled at the LA Motor Show. There are subtle exterior changes to the new MINI, including new headlights and bumpers, but the biggest changes are hidden under its curvaceous body. Two new 1.5-litre three-cylinder turbo engines will be available, with 134bhp in the Cooper and 114bhp in the Cooper D. A new 189bhp 2.0-litre engine will power the Cooper S and a tuned version of the same engine will be used in the 220bhp John Cooper Works Model. The MINI will also be underpinned by BMW’s new lightweight UKL1 front-wheel drive platform.

With the twin-turbocharged V8 powered S63 AMG already revealed by Mercedes, the German manufacturer has announced the more powerful V12-engined Mercedes S65 AMG will debut at LA. Figures are yet to be confirmed but power is rumoured to be in the region of 630bhp and the sprint from 0-62mph covered in less than four seconds. The S65 AMG is also likely to demand a substantial premium over the smaller £120,000 S63, which will also be on display at the LA Motor Show.

Mercedes have called time on the SLS supercar and will unveil a limited edition version called the Final Edition to mark the end of the cars production. No technical information has yet been announced but expect more power and more performance.

The Mercedes GLA 45 AM5 was also unveiled at the LA Motor Show 2013. Based on the same four–wheel–drive layout and powered by the same 355bhp 2.0-litre turbo as the A45 AMG, it’s set to give Mercedes a rival to Audi’s mad RS Q3.

The Mercedes AMG Gran Turismo is also on show in LA.  It is a concept that can be driven in the new Gran Turismo 6 computer game, but which has also brought it to life with a real 1:1 scale model.

One of the surprises of the LA Motor Show was the apprearance of the Nissan Juke Nismo RS. The RS uses the same 1.6-litre turbo as the standard Juke Nismo but with power boosted from 197bhp to 212bhp thanks to a tweaked ECU and updates to the exhaust.

Usain Bolt was in LA at the American reveal of the GT-R Nismo. The GT-R Nismo's twin-turbo V6 has been tuned to deliver 591bhp and 652Nm of torque. Insiders say this’ll cut the 0-62mph time to 2.4 seconds; faster than a 911 Turbo or Ferrari 458 Speciale – or pretty much anything else on the road.

One of the biggest attractions at the LA Motor Show was undoubtedly Porsche’s new baby SUV, the Macan. We’ve been continuously drip fed information about the Macan through leaked information, renderings, spy shots and even a passenger ride, but the official unveiling has finally happened.

Other motor show debutants include the Porsche 911 Turbo and Turbo S Cabriolet. We’ve already tested both cars overseas , and both cabriolet models feature a folding magnesium frame roof designed to replicate the arched shape of the coupe when it’s in place. Power also comes from the same 3.8-litre flat-six found in the coupe version, delivering 514bhp in the Turbo and 552bhp in the Turbo S.

Porsche's final offering at LA was the 918 hybrid supercar, which recently broke the lap record at the Nurburgring for a production car. It is the first time the car has been on display in North America.

Subaru unveiled a pair of new saloons at the LA Motor Show. The first to be revealed was the Subaru WRX, which is powered by an all-new direct-injection 2.0-litre boxer engine that produces 264bhp and 350Nm of torque. The second is the Subaru Legacy Concept, which is a preview of the new Legacy production car.