Chevrolet has revealed something completely new at the Detroit Motor Show 2015: the Bolt, a BMW i3 rival

In a surprise move, Chevrolet has revealed the Bolt EV concept at the Detroit Motor Show.

Looking like a cross between a BMW i3 and a Honda Jazz, the Bolt joined the 2016 Volt on the Chevrolet stand to showcase the company's renewed focus on electric vehicles. 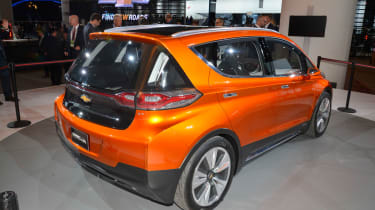 Just like its Volt sibling, the Bolt has a number of different driving modes for customers to choose - from daily commuting to more sporting drives. The Bolt can be charged from a fast DC charging point, too.

On the outside the Bolt has short overhangs to help with city parking, and a high-beltline and rear spoiler to give a sporty look. It's made from a combination of Lightweight materials, including aluminium, magnesium, carbon fibre and woven mesh to keep the weight down. In size, it's around the same dimensions as the BMW i3 - a clear rival for a future Bolt model. 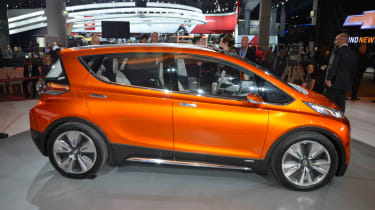 Inside, there's flat floor - giving an airy feeling, helped by a 'floating' dashboard. The centre console includes a 10-inch touchscreen displaying a myriad of information and accompanies the Bolt's EV Connect app. This app allows a smartphone to act as the car's key fob, giving key data like range, vehicle location and even the ability to pay charges such as parking.

Chevy says the car has been designed for long-range use in all 50 states of America and many global markets. With Chevrolet withdrawing from the UK, it's unlikely to appear on these shores - well, not as a Chevrolet at any rate.