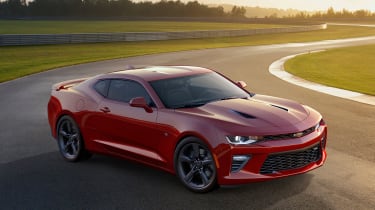 Chevrolet has pulled out of the British market, but that won't stop the new, sixth-generation Camaro from being sold here. Prices have now been announced, and the iconic muscle car will start from £32,500.

The 2016 Camaro will be sold through a solitary General Motors dealer in Virginia Water, Surrey, and will only be imported in left-hand drive. Buyers can order the 2.0-litre turbo or the V8 in coupe or convertible form for deliveries in October. UK numbers will initially be strictly limited, however. 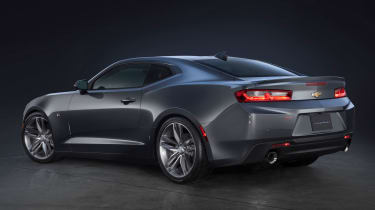 The sixth-gen Camaro looks similar to the existing car, but substantial wind tunnel development claims to have improved aerodynamic efficiency.

Use of aluminium in the Camaro's body and under the skin shaves 90kg off the kerbweight, and it's 57mm shorter and 20mm narrower thank before. Up to 70 per cent of the structural components are claimed to be new, while structural rigidity is also boosted by 28 per cent.

New engines for the Camaro include a debut for a four-cylinder engine in the muscle car. The unit comes hot on the heels of the Ford Mustang Ecoboost and the 275bhp 2.0-litre engine produces 400Nm of torque, firing the Camaro from 0-62mph in less than six seconds. Despite that, it gets 30mpg on the US economy test (Around 36 mpg in the 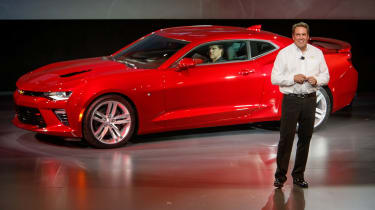 Moving up the range, an all-new 3.6-litre V6 engine now produces 335bhp and 285Nm of torque, while the Camaro SS still receives the full-fat 6.2-litre V8 with 455bhp and 617Nm of torque. All engines can be had with either a six-speed manual transmission (with Rev Match tech) or eight-speed 'Hydra-Matic' paddleshift auto.

Are you excited to see the Camaro back in the UK? Would you take this Chevy over the new Ford Mustang? Let us know in the comments section below...