Is this the car that will set the Chevrolet badge apart from its Daewoo predecessor? The new Matiz keeps its city-friendly dimensions and perky styling, but along with the unfamiliar name, it benefits from a whole host of welcome changes that enhance versatility, fuel economy and refinement. 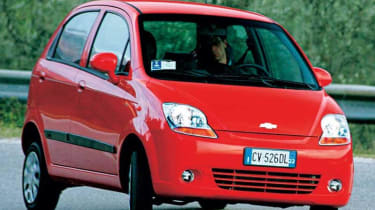 Chevrolet's extensive makeover has given the Matiz a new lease of life. It's now far more refined, frugal, better to drive and comes with extra kit. But the little Chevy is facing seriously stiff competition from the new Peugeot 107, Citroen C1 and Toyota Aygo city cars. They may cost more, at £6,500, but the Matiz will struggle to match their image.

Is this the car that will set the Chevrolet badge apart from its Daewoo predecessor? The new Matiz keeps its city-friendly dimensions and perky styling, but along with the unfamiliar name, it benefits from a whole host of welcome changes that enhance versatility, fuel economy and refinement.

The Giugiaro-penned lines of the original Matiz have been freshened up with sharp-edged new headlamps, a lower front grille and bold round tail-lights. It may lack the cute looks that made the original such a big hit, but the car is certainly distinctive.

Much of the restyled metal is new, too - around 40 per cent of the Matiz's panels are made from lighter high-strength steel, lowering kerbweight by more than 100kg to 727kg.

This, along with revisions to both the 796cc and 1.0-litre engines, has seen a dramatic improvement in fuel returns. Economy on the smaller unit is up from 46.3 to 54.3mpg, while on the larger motor it climbs from 44.1 to 50.4mpg.

Both powerplants now comply with Euro IV emissions regulations, and the engineers have worked hard on refinement. The Matiz is now far quieter on the move thanks to better insulation. Only a background engine hum penetrates the cabin, and there's little road and wind noise at motorway speeds.

With only 66bhp and 91Nm of torque available, though, performance in the 1.0-litre version we drove is best described as relaxed. The car has to be pushed to make decent progress.

Grip levels are low, which is hardly a surprise given the Chevy's tiny, skinny- profile tyres, and understeer sets in early through tighter corners. And while the light steering is ideal in town, its lack of feedback becomes obvious at speed. Thankfully, the long-throw gearchange is direct and the brakes feel strong.

The ride is now smoother at lower speeds, too, further improving comfort for occupants. What's more, the driving position is fine with good visibility, and although it takes time to grow used to the central dash-top dials, they are clear and simple. The seats are comfortable, while there's decent room for four.

A less intrusive rear suspension set-up means boot space is increased from 104 to 170 litres. Remove the back headrests and the split rear bench flips forward, boosting the capacity to 845 litres. Standard kit should include twin front airbags, a CD player and ABS.

When the Matiz goes on sale in June there will be three trims - S, SE and SX - and prices aren't expected to be much higher than those of the current range. That means the base 796cc S will cost around £6,000, with the flagship 1.0-litre SX at about £8,000.