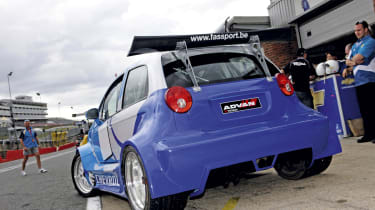 This crazy Matiz is a great example of what can be done with limitless imagination and a big budget. Had it not been for the huge variety available from Chevrolet’s model range, the incredible V8-engined machine would never have seen the light of day.Merging components from the extreme ends of the product range, it isn’t going to change the world – but this strict one-off is still a very interesting concept.

When it was announced that US legend Chevrolet would make its official debut in the UK in 2005, the surprise was palpable. Then, bosses revealed that they would plaster Chevy badges on the front of former Daweoos – and jaws really hit the floor.

However, the move has allowed racing expert FAS Sport to combine the brands’ most famous cars: the Matiz, Corvette and Camaro. The result is the Chevrolet Matiz V8, a crossbreed that promises vast performance.

It’s the only three-door Matiz in the world, and retains the regular front doors, roof, tailgate and glass. Inside, you sit further back in the stripped-out, race car-inspired cabin, near where the rear doors used to be, and get unique pedals. But the dash is in exactly the same place.

Changes are more extreme under the bonnet. By using the front subframe from the Camaro, engineers have somehow been able to squeeze in its massive Corvette-sourced 550bhp 7.0-litre V8. A rally car-style sequential gearbox sends drive to the rear tyres.

The wheelbase is the same as the regular Matiz’s, but this car doesn’t drive like one. It borrows its steering, brakes and numerous other parts from the Corvette, giving a unique experience. The body bounces on to the suspension bump stops, while the brakes lack bite and the steering is less than precise.

Yet dynamic excellence isn’t key. Instead, the V8 is designed to grab attention – and that wild bodykit ensures it succeeds. This city car on steroids has to be treated with care, as the huge 18-inch alloys struggle for grip. And with the short wheelbase and soft suspension, you need to ensure the Matiz is straight before touching the throttle – 0-60mph takes 3.7 seconds in this ultimate example of power in a strange place.

Rival: Renault Clio V6 Not many cars offer such huge power in a small package, but Renault’s Clio V6 comes closest. Although it’s no longer on sale, it proved that compact models with enormous potential can work as roadgoing vehicles.