The Chevrolet's unfussy and capable about town, but more modern rivals outgun it with greater versatility and superior performance 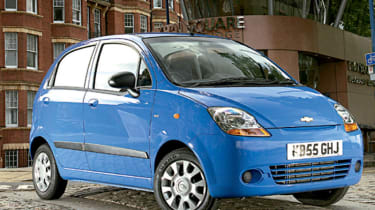 While the little Chevrolet is unfussy and capable about town, more modern rivals outgun it with greater versatility and superior performance. Quite frankly, the 0.8-litre engine is not up tothe demands of today’s fast-moving motorway traffic. The Matiz is cheap and well equipped – but similarly priced competition offers drivers a great deal more for the money.

Things move fast in the new car market, but while Daewoo might be a distant memory, its spirit still lives on – not least in the city car, the Matiz. Now badged Chevrolet, the five-door hatchback has remained largely untouched by the changes which have affected the rest of the firm that built it. But it’s not been forgotten.

Careful revisions to the engine and suspension, plus gentle evolutions in interior quality, have strengthened its appeal, as has a new face, applied last year. Yet with competition in the city car market advancing rapidly, how does the Matiz stack up, particularly with an automatic gearbox?

The 796cc engine and 84mph top speed may not make the Matiz the first choice for drivers in a hurry. However, look further down the spec list and it’s hard to ignore the price.

At £7,145, our 0.8-litre SE test car seems a bargain, not least because the standard equipment includes electric windows and air-con. Running costs are also rock bottom, with the Matiz qualifying for Group 1 insurance and only £115 annual road tax.

So, at first sight, there’s no doubt the Matiz is great value. And although its styling is not as cutting edge as rivals such as the Peugeot 107, Citroen C1 and Toyota Aygo, it does offer as much space inside. Front and rear seats are comfortable, while the boot has a usable 170 litres of stowage space. At idle, the 50bhp, three-cylinder petrol engine purrs. It’s vocal, but not un-pleasant. Throttle response is good, and the four-speed auto takes some of the pain out of driving around town.

Less impressively, 0-60mph is dispatched in a leisurely 21.9 seconds and punctuated by rough gearchanges. The motor, despite being settled at idle, starts to sound and feel extremely coarse. And the situation gets worse as you leave the city limits. Keeping up with motorway traffic requires a heavy right foot and real determination.

With the throttle spending 75 per cent of the journey time buried in the floor carpet, you’ll also need to learn to ignore the powerplant, which roars loudly at high revs.

At least the suspension and brakes feel well put together. And while the Matiz is not going to win any point-to-point sprints, it is surprisingly comfortable over rough surfaces – a must for any decent city car.

The problem is that while the Matiz is certainly good for urban driving, it struggles to cope with all of the challenges UK roads throw at it. And for that, even a low price is too much.