The Chevrolet Orlando is the maker's first MPV designed to compete in the British MPV market, and it offers great value for money 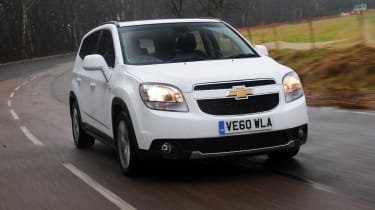 The Chevrolet Orlando is a seven-seater MPV that rivals the Ford C-MAX, Renault Scenic and Citroen C4 Picasso. Chevrolet's cars over the past few years have been aimed much more directly at the European market, which means that cars like the Orlando have plenty of appeal to UK buyers. That's especially true when you consider that the Chevrolet Orlando is a well made and cheap alternative to the established MPVs from Renault and Ford. Many buyers may not even know it exists, but thanks to strong engines, chunky styling and a practical interior it's actually well worth a look for a potential MPV buyer.

Few buyers will expect their large family car to handle like a racing car and have performance figures to match, and of course the Orlando stays true to its MPV roots. It's not slow, however, and the 2.0-litre diesel has plenty of shove. It actually produces 128bhp and goes from 0-62mph in just under 10 seconds. The handling isn't too bad either, as the stiff suspension set-up has improved body control around the corners. However, this does mean the Orlando has a firmer ride than rivals like the Citroen C4 Picasso and rough roads can be a bit of a chore for passengers. Visibility is hindered, too, and the light steering doesn't have much feel. Avoid the 1.8-litre petrol engine, as it's thirsty without producing enough power to make up for it. Both the manual and automatic gearboxes are solid and there's no reason to choose one over the other.

We'd almost always recommend diesel engines for MPV buyers, and the 2.0-litre, 128bhp diesel in the Orlando is the one we'd go for. It returns 47.1mpg whilst emitting 159g/km of CO2, and although that can't beat the Citroen C4 Picasso or Ford C-MAX, it is quicker and packs plenty of grunt, which is an important factor when carrying lots of passengers or cargo. The 1.8-litre petrol engine will return 38.7mpg, and thanks to poor power output it's best avoided. A low list price means the Orlando looks like great value, however – the base spec diesel is around £4,000 less than the equivalent Ford C-MAX. Plus, you'll get Chevrolet’s fixed-price servicing and 100,000 mile or five-year warranty no matter which version you choose to buy.

The Chevrolet Orlando is a practical family MPV, but it offers something very different when it comes to styling. It's just as stylish as rivals like the Citroen C4 Picasso, with the bold styling and chunky details giving it somewhat of a retro appeal. The large grille, oversized Chevrolet badge and massive door mirrors make the front end very distinctive. Follow the lines down the side and towards the rear and the chunky styling remains, with black trim and aluminium style scuff plates. The small rear window and oversized taillights aren't quite as cool as the rest of the design, though. The interior of the Orlando is at least as good as the Ford C-MAX, and much better than a Renault Scenic, thanks to chrome detailing and some nice black trim.

Practicality is where MPVs shine, and the boxy shape of the Chevrolet Orlando means it's just as good as you might expect. Fold down the rear seats and you’ve got a huge 1,499-litre load space, but put them back up and you only get 89 litres of space - it seems you'll have to choose between passengers and luggage. Access to the rear seats is easy enough, but the headroom in the back could be better. You do get an extra mirror to keep an eye on the kids in the back, which is a neat touch, as well as a cubbyhole behind the front of the stereo for storing your MP3 player.

Chevrolet managed a decent 20th place in the 2013 Driver Power manufacturer’s rankings, but it’s been steadily rising up the list – it came in last in 2011 and failed to rank in 2012. Orlando owners will benefit from the firm’s improvements when it comes to reliability, then, but the car itself didn’t manage to rank in the customer satisfaction survey’s list of the top 100 cars. You do get a five-year warranty with servicing and breakdown cover, however, which should provide peace of mind. Some of the interior parts do feel cheap and flimsy, however, so the Orlando might not stand up to family life as well as some sturdier models on the market. The Orlando scored the full five stars for safety in the Euro NCAP crash tests, thanks to equipment like ESP, traction control, braking assist, Isofix child seat fittings and six airbags as standard. 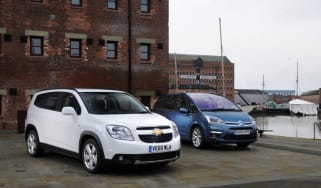 Has Chevrolet’s ship come in? Chunky new Orlando aims to make waves in the seven-seat MPV class – and we test it against Citroen’s Grand C4 Picasso...
Chevrolet Orlando 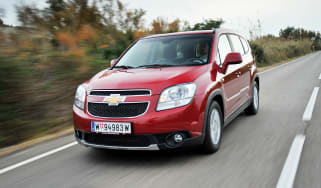