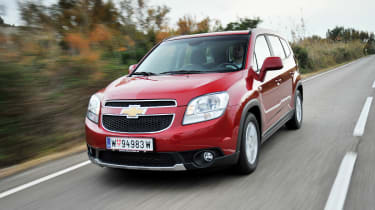 The Orlando represents the first step in Chevrolet’s ambitious expansion plan, and it’s a roomy, honest MPV with a sense of personality so often missing in this sector. It also continues the brand’s tradition of offering fine value, undercutting similarly specced rivals by well over £1,000. This 2.0 diesel is the pick of the range, but it may struggle to tempt customers away from competitors.

Meet the car that’s bringing a slice of Orlando magic to the UK! Chevrolet’s fresh seven-seater is the first of six new models poised for launch next year – and we got behind the wheel to see if it can compete with heavy hitters such as the Renault Scenic and new Ford C-MAX.
First impressions are good: the squared-off shape mostly works well, even if the high-sided boxy rear won’t suit all tastes. Still, the chunky Orlando should have no trouble standing out against its conservative competition.
Inside, the good news continues. The classy cabin is one of Chevrolet’s best yet, with chrome details and gloss black inserts helping to lift the overall ambience. Build quality is sturdy, yet some areas still fall short of the class leaders. For example, the hidden storage bin behind the stereo for valuables such as iPods is a nice idea, but it feels too flimsy. Likewise, the plastics on the instrument cluster and gearstick fail to impress.

Space is by far the Orlando’s biggest asset, and something it delivers in spades. The boot area expands from 89 to 1,487 litres – depending on the seating configuration – and the load space is flat, if a touch shallow. There’s room for adults in all seven seats, too, with the only issue being limited headroom for those at the back. But the seats all fold flat, or roll out of the way with a pull of a lever. Moving them around the cabin is satisfyingly simple, too – a real bonus when you’ve got only one hand spare.
The new 2.0-litre diesel is surprisingly quiet and refined, and even our 128bhp version has enough grunt to ensure the car rarely feels slow. The 1.8-litre petrol is best avoided, though: it’s underpowered for a model of this size, and becomes noisy and strained on the motorway. A smaller turbo will join the range later on this year. Thanks to the Orlando’s 16-inch alloys the ride is relatively composed, but the suspension can’t deal with large imperfections, which send
shudders through the cabin.
This firmer set-up means the Chevrolet handles relatively well, with good body control and not much roll in corners, although the vague steering doesn’t encourage spirited driving. It’s clear that this is an MPV which is more at home quietly cruising than nipping in and out of traffic – it feels wide and bulky. The Orlando is a well priced first attempt by Chevrolet in this competitive segment, but it lacks the polish of established rivals, and might struggle to attract new buyers to the brand.
Rival: Citroen C4 Grand Picasso Citroen seven-seater can’t match the Orlando’s impressive cabin space or easy-to-use seats, but it does offer a classy interior, relaxing driving experience and plenty of style, justifying its slightly higher price.
Share this on TwitterShare this on FacebookEmail