The Grand Voyager was the world's first MPV, and now it wants to be the best too. 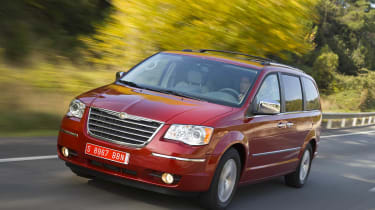 The new Grand Voyager is a big advance over its lacklustre predecessor. There’s plenty of space and safety kit, plus neat features to boost versatility. But the interior could have a better finish, while the diesel is underpowered and the driving experience isn’t great. Chrysler can lay claim to the title of original MPV, but on this evidence there is still room for improvement.

Being first isn’t the same as being the best, as Chrysler knows. It lays claim to inventing the MPV market in 1983, but isn’t a class leader. Recent Voyagers have suffered poor crash test ratings, leaving them far behind Renault’s safety-conscious Espace.

But Chrysler says the 30 new features on the latest generation make it the safest, most luxurious yet. Are these changes – including stability control, more airbags and a 50mm longer wheelbase – enough to take the MPV to the top? For a start, a boxy design replaces the outgoing model’s soft curves, giving the newcomer an imposing presence on the road, even if it looks more van than MPV.

Inside, there’s greater space, and Chrys-ler has attempted to create a more upmarket cabin. However, the sections of fake walnut dash and array of cheap plastics create an unappealing, mock-posh feel.

Still, it’s very versatile. The excellent Stow ’n’ Go seats remain, while a new £750 Swivel ’n’ Go system is for turning the second row through 180 degrees. A table can then be fixed between the second and third rows of seats, although legroom is limited. Other additions include one-touch powered rear doors and ambient lighting. For £1,750, buyers can opt for the neat MyGIG infotainment system for watching films, listening to music and operating the sat-nav.

Out on the road, the car is quieter than its predecessor, due to improved noise insulation and the smoothness of the 2.8-litre CRD engine. The new six-speed automatic transmission is slick, but acceleration is slow. Also, the heavyweight Voyager returns fuel economy of only 30.4mpg on the combined cycle. Body roll is evident on twisty routes, and the steering is overassisted. The seven-seater is far more comfortable on motorways.

The starting price is being held at the same level as the outgoing car’s. As a result, the well specified entry-level LX model – available with only a diesel engine and automatic transmission – is £25,995.

Rival: Renault G. Espace The French people carrier has been around since 1984. It’s prettier, has a better safety record and is more fun to drive. However, if you want it to match the Chrysler’s standard equipment, you will have to splash out on options.