Chrysler's all-new Grand Voyager is charged with reviving the manufacturer's British hopes. Do we think it's up to the task? 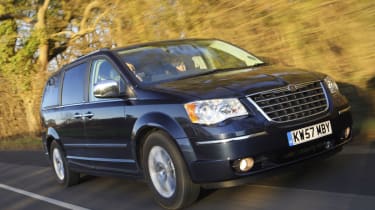 It’s not the best-looking MPV, nor the greatest to drive, but as a practical people carrier, the Grand Voyager is a fantastic choice. It’s comfortable and spacious, while the Stow ’n Go seating system is superb. And although the cabin still can’t rival the best European models, the newcomer is a big improvement on its predecessor.

Chrysler has had a tough time in the UK of late. As part of a renewed drive to pep up sales, it has introduced new cars such as the Ford Mondeo-rivalling Sebring. But early signs have not been encouraging, and so far the move has failed to set the market alight.

So, the launch of the all-new Grand Voyager can’t come soon enough – and the model has a lot to prove. Last year, its predecessor was lambasted by Euro NCAP for a shocking perfor­mance in crash tests. It was awarded only two stars for occupant protection and zero for pedestrian safety. But with 30 new features, Chrysler claims the all-new MPV is not just the safest version, but the most luxurious yet.

Safety has clearly been a priority – side curtain airbags all-round and added rollover protection are standard, which should give peace of mind to family buyers. Brake assist and stability control systems are also included.

The Grand Voyager has lost none of the versatility of its predecessor. The excellent Stow ’n Go seating system is carried over and, as before, the second and third rows can be quickly and easily folded into the floor. Buyers choosing the top-spec Limited variant can also opt for the new £750 Swivel ‘n Go system – this brings a second row of captain’s chairs which rotate 180 degrees, plus a removable table and power folding third row.

Electrically sliding side doors mean getting into the back is simple. They open more quickly, too, as does the powered tailgate. The boot space is another strong point – even with the rearmost chairs in place, there’s still a 756-litre capacity. Drop all the seats, and this increases to 3,296 litres.

What lets the Grand Voyager down is the interior quality. While the cabin represents a significant improvement over the car it replaces, some of the plastics on display feel cheap, and the design is rather uninspiring.

Also disappointing are the shiny leather seats – this doesn’t feel like a car that costs £30,000-plus! We’re far from convinced about the looks, either. Gone are the rounded lines of the old car, replaced by a boxy shape that’s more minivan than stylish MPV.

On the road, the Grand is quieter thanks to better noise insulation and the smooth 2.8-litre CRD engine. The diesel delivers 161bhp and 360Nm of torque, and provides reas­onable performance considering the Chrysler weighs two tonnes. A 3.8-litre V6 petrol is available, although it’s thirsty and won’t appeal to many buyers in the UK.

Either way, the Grand Voyager is much happier on motorways than on twisty roads. There is plenty of body roll through corners, but long-distance cruising is a real strength, as it glides over rough surfaces in comfort.

Starting prices remain unchanged, so the base LX is £25,995 – decent value given the space and kit on offer. Three-zone climate control and electric windows all-round are included, in addition to those powered doors.

The top-spec Limited isn’t cheap, at £32,995, and it doesn’t even feature sat-nav. That comes as part of the £2,000 entertainment package, which also brings a pair of drop-down DVD screens and a 20GB music server. With its square dimensions, the Grand Voyager bucks the trend set by sporty MPVs such as Ford’s S-MAX. But there’s no denying it has superb space and is truly comfortable.

Rival: Renault Grand Espace while the Renault isn’t as large as the Voyager, it’s more stylish. Interior quality is also way ahead, although it trails the Chrysler for standard kit and outright versatility.