IT’S all kicking off in the large people carrier market. 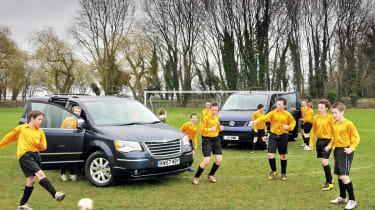 IT’S all kicking off in the large people carrier market. In recent years this sector has been slightly neglected, as firms have concentrated on producing models to fight it out in the lucrative compact MPV arena.

But now it’s time to swing attention back towards the premier league of people carriers. Chrysler’s Grand Voyager has long been a popular choice for transporting large families, although it came in for criticism last year, when it fared poorly in Euro NCAP crash tests. It achieved only two stars for occupant safety, and none at all for pedestrian protection.

So this new model is crucial, as it promises to retain the flexibility of its predecessor, but improve on the shortcomings in other areas. Billed as more sophisticated and refined than before, it’s clearly at the luxury end of the market.

But is it the ultimate people carrier? That’s what we intend to find out as we pitch it against the Volkswagen Caravelle, another equally cavernous and upmarket MPV.

Available with up to eight seats, its robust build quality and bulletproof reliability are strong selling points, while the spacious and flexible interior is luxuriously finished.

So if you have half a football team plus kit to transport to an away match, which will cope best? We put both through their paces to find out.

PEOPLE carriers don’t come much bigger than these two. Although Volkswagen also offers the Touran and Sharan, neither can rival the Caravelle for sheer size. The model’s minibus styling won’t be to everyone’s taste, but it means acres of space inside. It’s incredibly comfortable, too, and as family transport for long journeys and holidays, it’s ideal. The sliding and swivelling seats, plus the clever folding table, only add to the appeal.

It’s not ultimately as versatile as the new Grand Voyager, though. While it has a boxier profile than its predecessor, the Chrysler has lost none of its clever cabin tricks – in particular the superb Stow ‘n Go seating layout.

We’ve yet to see a system that can match it. Not only is it quick and easy to use, it means you don’t have to remove the seats in order to get a flat load space. As we found in the Caravelle, this is an awkward and back-breaking job.

That’s why the Chrysler takes the honours – it’s the better all-rounder. As the ultimate test, we asked the members of our football team to pick their favourite – and the Grand Voyager won the day.