IT was Chrysler’s best-selling model, but the outgoing Grand Voyager wasn’t without its faults, not least when it came to its poor crash test record. 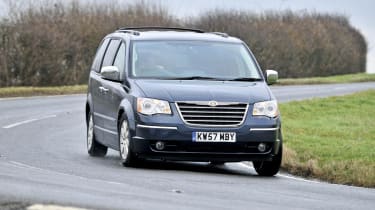 IT was Chrysler’s best-selling model, but the outgoing Grand Voyager wasn’t without its faults, not least when it came to its poor crash test record. That might explain why the new car is even bigger than its predecessor, and measures well over five metres long.

Chrysler claims it is safer and more luxurious, yet still provides plenty of space. We’re surprised by the bodywork, though. The US firm seems to have ignored the current trend for stylish MPVs, such as the Ford S-MAX and Citroen C4 Picasso.

Instead, it has gone for a boxy design reminiscent of the American minivan of the Eighties. It’s a huge departure from the rounded shape of the old car, and the Grand Voyager seems much bigger in the metal than the pictures suggest.

The Chrysler’s size is evident as soon as you open the sliding side doors. It has a higher roofline than the old model and is more spacious inside. A contemporary black finish replaces the grey upholstery of its predecessor, and there’s cool blue mood lighting from the overhead console. This also houses two useful drop-down cubbies, as well as optional DVD screens.

But the best thing about the rear is the Stow ‘n Go seating system. This allows you to fold all five chairs into the floor to create a flat 3,296-litre load space. That’s well behind the Caravelle’s 5,474-litre maximum, but the ease and speed of the seat folding system is impressive.

All the chairs can be slid fore and aft, and legroom is superb – the second row offers 750mm, while the rearmost seats provide 790mm. And when the seats are in place, the compartments they stow into double as additional underfloor storage areas.

Shoulder space is a little cramped with three people in the rearmost seats, but it’s far from claustrophobic, and boot capacity with all the chairs in place is another strong point, at 756 litres. Handily, the back seats can also be reversed – useful if you want to watch your kids’ football match in comfort under the cover of the tailgate! A Swivel ‘n Go system, which features two rotating captain’s chairs in the second row, is available as a £750 option.

The driving environment is much better than in the old model. It’s still not perfect – some of the plastics feel brittle, it’s quite cramped and we’re not fans of the tacky wood trim. Also, there’s still no reach adjustment on the wheel. But there are improvements. A floor-mounted gearlever replaces the column change, the layout is more attractive and overall the Grand Voyager is better built.

The 2.8-litre CRD diesel has also been updated. It’s quieter and smoother than before, but it’s not as punchy as the VW’s unit – a 0-60mph time of 11.8 seconds is a second slower. In-gear acceleration is quick enough, but the Chrysler can get a little coarse at high revs.

On the road, the Grand Voyager is composed, but far from exciting. Body control is kept in check considering its size and weight, and the suspension soaks up bumps and potholes with ease. Wind noise is low, and a stiffer body means there’s minimal vibration in the cabin, even over rough roads.

Our top-spec model costs £32,995 and comes well equipped, with eight airbags, electric sliding doors and leather seats as standard. But does all this kit help make it a class leader?

BOSSES will be hoping the new Grand Voyager can perform as well as the 300C second-hand – and improve on the previous generation’s 36.1 per cent residual value.

If Chrysler wants to appeal to more premium buyers, its garages must improve. They came 22nd out of 32 in our Driver Power 2007 dealer survey. Three services cost £1,070.

FILTHY emissions mean both cars sit in the top bracket for company car tax. But due to its lower price, the Chrysler is slightly cheaper to run – lower-band owners will pay £2,541 annually.