The Chrysler Voyager is an MPV pioneer, and the latest car is good value 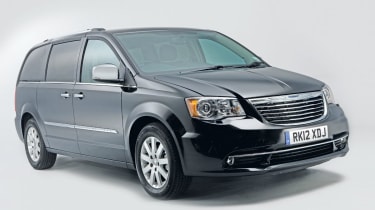 While the Ford Galaxy is a better all-rounder, not much can touch the Grand Voyager’s practicality. With the seats folded flat the 756-litre boot capacity jumps to a huge 3,296 litres, making this a really accomplished carry-all. However, high running costs and questionable reliability count against the Chrysler, particularly when compared to the more established European rivals.

Chrysler was one of the pioneers of the people carrier – alongside Renault – when it launched the innovative Voyager (as the Dodge Caravan) back in 1983, so it knows a thing or two about what makes a great MPV.

More than 13 million sales later, the current car is better than ever – and if you shop around, you can buy one of the most spacious, practical and versatile people carriers for surprisingly little, as prices start at only £10,000.

However, running costs can be high and reliability poor – and buying the right specification is absolutely crucial to getting the most out of Grand Voyager ownership.

The Special Edition of May 2009 celebrated 25 years of the Voyager (only a year late!); just 100 of these were made, each with leather, a DVD player and metallic paint.

Revisions in summer 2010 saw a 10 per cent improvement in CO2 emissions and fuel economy, plus the addition of anti-whiplash head restraints. A facelift the following summer brought a revised grille, lights and badging, as well as improved seating and extra standard kit. At the same time, the petrol engine was dropped.

The Renault Espace comes in standard and larger Grand Espace forms. It’s stylish, refined and good to drive, but reliability can be patchy. The Kia Sedona is well equipped, dependable and roomy, yet the dynamics are lacklustre.

The Ford Galaxy is better to drive, spacious and well equipped, plus reliability isn’t bad. Prices are keen, too. Also think about the Hyundai i800. There aren’t many about and it feels rather bargain-basement inside, but it’s very dependable with a huge cabin.