The Hyundai i800 offers eight seats with loads of luggage space, but don’t come looking for excitement or luxury 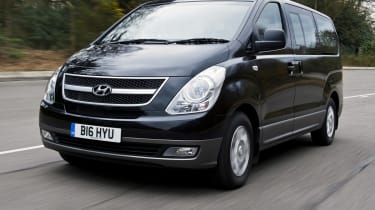 The i800 competes mostly against van-based buses such as the Ford Transit Custom Kombi, Mercedes Vito Tourer and Volkswagen Caravelle, although it doesn’t have the style or the cachet of its rivals. Still, while searches for a used i800 for sale on eBay may not return scores of i800 camper or surf bus conversions, the upside is greater affordability. If you’re looking for space and practicality on a budget, you won’t find much more of either wherever you look.

The impressive Hyundai i800 dimensions are derived from its boxy shape, and mean that as well as three rows of full-size, adult-friendly seats, you also get loads of luggage space. More ‘car-like’ people-carrier rivals such as the Ford Galaxy, Peugeot 5008 and SEAT Alhambra can start to feel a bit short on space when you need to pack in a full complement of passengers plus luggage.

There are downsides of course, and one of the major ones is that the Hyundai i800 doesn’t offer the host of advanced safety technologies that are increasingly available on designed-for-the-purpose people carriers. The driving experience is unexceptional too, although that’s unlikely to worry drivers using the vehicle for business. However, the model’s van roots also show in a less than premium feel to its interior fit and finish, and the i800 spec list looks relatively basic compared to plusher people-carriers. 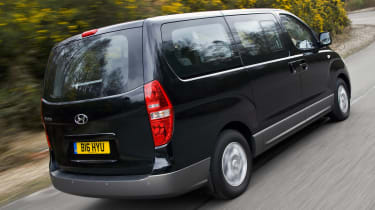 It’s not entirely Spartan, and the standard SE trim delivers features such as alloy wheels, dual-zone air conditioning, parking sensors and a six-speaker stereo with steering wheel controls and Bluetooth. You also get useful sliding side doors and privacy glass for your passengers.

Pay a bit extra for the SE Nav version, and you get a seven-inch touchscreen navigation system with a reversing camera, and automatic headlamps too.

Power comes from a single diesel engine option of 2.5-litre capacity, but power is limited to 135bhp with the six-speed manual gearbox. If you splash out almost £2k on the five-speed auto option then power is bumped up to 168bhp. The only other optional extras of note are metallic paint and leather seat facings, which will make your i800 feel more like an executive taxi, but together add nearly £3k to the purchase price. Safety kit is pretty low on the agenda too, with not much on offer beyond the bare essentials.

Still, the Hyundai i800 fulfills its role as a cheap mass transportation very ably, and with Hyundai’s excellent five-year warranty thrown in, it’s easy to see the appeal.

The Hyundai i800 van-based people carrier is aimed primarily at business drivers who need a crew bus or an airport shuttle, but the roomy eight-seat i800 interior also attracts super-sized families who need a bigger than average people carrier.

Vans are not renowned for offering a very engaging driving experience, so it's hardly surprising that the van-derived i800 is a pretty uninspiring vehicle to get behind the wheel of. At least it has enough grunt to make decent progress: a 2.5-litre turbodiesel is the sole engine option, producing 135bhp in manual mode. Acceleration is stately rather than shocking, but you wouldn't call the i800 underpowered – it can overtake with ease and won't be overwhelmed by a steep gradient.

The engine can be specified with either a manual or – for a £2,160 premium – an automatic gearbox which also means you also get a power upgrade. It’s worth having, because as well as taking the drudgery out of changing gears, the extra power knocks the 0-60mph time down to 14.4 seconds from 17.6 seconds in the manual. Neither option is particularly impressive to drive, but both get the job done. 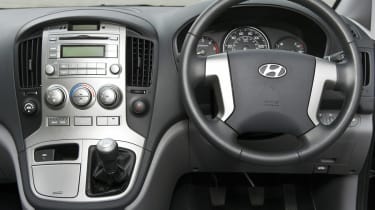 Although the i800 is diesel-engined, it can't compete with more up-to-date models for either fuel economy or environmental friendliness. The combined test figure is 37.7mpg for manual versions, and CO2 emissions approaching 200g/km will make your annual road tax bill quite high, too. Opt for the auto, and combined economy drops to a rather poor 33.6mpg.

On the plus side, the i800 comes with Hyundai's five-year warranty, removing the headache of potential repair costs. On the downside, it won't be worth an awful lot when those five years are up, as residual values are not great. The only real finanical plus point for the i800 is its low purchase price – you won't transport eight people in comfort for less money.

There's not a lot you can say about the styling of the Hyundai i800, as it's basically a giant box on wheels. Any notion of aesthetic appeal is sacrificed in favour of sheer carrying capacity. The headlights are big and ugly and the small wheels look mismatched on such a large car – really, the only defining visual quality of the i800 is its sheer size. The big Hyundai is a purely functional vehicle – something rarely seen in today's car market – so it will appeal to practical-minded buyers who place little value on style and desirability.

Although the i800 offers unmatched carrying capacity for passengers and luggage, it does have an Achilles Heel when it comes to practicality: its middle row of seats cannot be moved, which is extremely inconvenient compared to the clever folding systems seen in rival MPVs. Aside from this, however, you get the aforementioned 850 litres of boot space even with all three rows of seats in place, as well as very generous head and legroom. There is a lack of clever cabin storage spaces, however – another area where the i800 falls down against more car-like opposition. 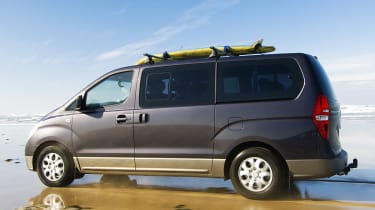 The i800 boasts the basic durability of a commercial vehicle, with a proven engine and transmission, and not much in the way of fancy gadgets to go wrong. There's also the peace of mind that comes with the aformentioned five-year warranty. Behind the wheel, the Hyundai MPV feels safe thanks to its enormous bulk and raised driving position, but it does lack some safety equipment compared to the competition, with only two airbags up front. The i800 hasn't been tested by Euro NCAP, but it does get electronic stability control as standard.

For an alternative review of the latest Hyundai i800 MPV visit our sister site carbuyer.co.uk 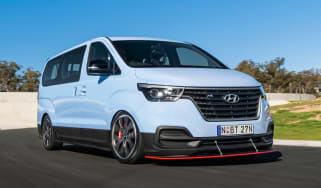 Hyundai’s Australian arm has built a one-off, 400bhp version of the eight-seater i800 people carrier for going sideways in
Skip to HeaderSkip to Content