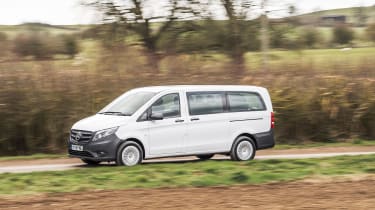 When a standard MPV just can't cope, the Mercedes Vito Tourer and its panel van based people carrier rivals ride to the rescue. The Vito is a massively practical vehicle in Tourer form, one of the very best options out there for up to 8 adults and luggage. Engine refinement and car-like handling are highlights but be warned, entry-level versions are minibus basic and the prices increase quickly as you climb the extensive range.

You'll need more than £40,000 to buy a Mercedes V-Class, the brand's spacious and highly luxurious 7-seat MPV. If you've got a family with four (or more) kids to ferry around or a business with clients to move and a profit to turn, that's quite an outlay. But before you drift away from the three-pointed star in search of your super-sized people carrier, just wait. Mercedes does offer a more affordable option in the shape of the new Vito Tourer.

The Vito is Mercedes' mid-sized panel van and the Tourer is the passenger-carrying version of it. Mercedes wouldn't thank us for using the word minibus with all its school trip connotations but that's pretty much what we're dealing with here.

The Vito Tourer is a minibus, but it's a Mercedes-Benz minibus - so although it has more of a commercial vehicle look and feel than the leather-lined V-Class, there is an air of quality about it. The Vito Tourer is built on the same platform as the V-Class too but it's offered in front-wheel-drive form as well as the expected rear-wheel-drive. This, together with less potent engines and a significantly lower spec, help the Tourer achieve a starting price just over £25,500 (including VAT). 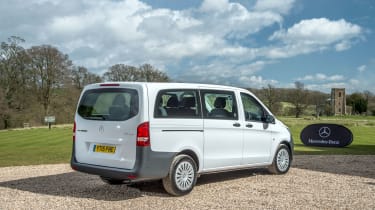 Like the Vito van, the Tourer version is offered in three body lengths: Compact (4,895mm), Long (5,140mm) and Extra Long (5,370mm). Even in the Compact model, there's a usable amount of luggage capacity behind the third row of seating, even if the 0.8m3 space is a bit tall and shallow in shape. Go for the longer versions and you've got a load space to put most estate cars to shame on top of that 8-seater capacity. The Extra Long version can swallow 1.6m3 of luggage.

The commercial vehicle origins of the Vito Tourer give rise to lots of mix and match potential in the range. The rear seating can be specified in rows of two or three chairs with the middle row facing forward or to the rear. Each seat gets a 3-point belt and a headrest but if you go for the delux seating, the backrests adjust individually and can fold forward to create tables. There are also two ISOFIX points per row. 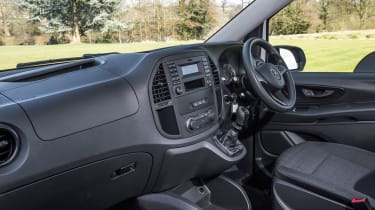 You don't get the clever MPV-style folding and spinning seats but there is plenty of room for a six-foot adult in each of the Vito Tourer's rear berths. The seats can be removed and repositioned using a grid of mounting points cut into the floor but because the seats are fixed together in rows, they are extremely heavy.

Access to the third row isn't brilliant either. The outer seat in the middle row releases and tilts forward but it's still a bit of a scramble getting back there. At least the Tourer does give you sliding side doors on both flanks, plus a lifting tailgate. You need quite a bit of space behind the vehicle to get that tailgate open and the Vito's low (for a panel van) 1,890mm maximum roof height increases the risk of smacking your head on it when it's open. Side hinged rear doors in place of the tailgate are available as an option.

The advantage of the Vito Tourer being lower than passenger carrying versions of the Volkswagen Transporter (1,990mm) and Vauxhall Vivaro (1,971mm) is that it sails under the standard 2-metre hight restricters with room to spare. All of these vans come in under the 2m mark but it can be nerve-wracking negotiating a multi-storey car park when you know your roof's only millimetres from the light fittings. 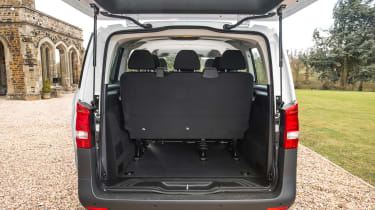 On the road, this wieldy feel continues to be a Vito Tourer strength. Although it's still a sizeable vehicle compared to mainstream MPVs, it has a car-like driving position with less of a step-up to the driver's seat than other van-based models. Visibility is good and there's lots of adjustment on the steering column.

All the Tourer versions of the Vito are fitted with comfort suspension that offers a significantly softer ride and you get in the van models. We tried the entry-level front wheel-drive 109 CDI variant powered by a Renault-sourced 87bhp 1.6-litre diesel and found it refined but seriously lacking in punch for motorway journeys.

The 114 CDI is the least powerful of the rear-wheel-drive models that use a 2.1-litre Mercedes engine but performs significantly better on the road. Not just because of its 134bhp output but also with the improved steering and snappier gearchange that accompany the Vito's RWD layout. The speed sensitive power steering can be a little unpredictable, occasionally adding weight in low speed corners when you don't really want it, but generally the Vito is a very composed and refined proposition. 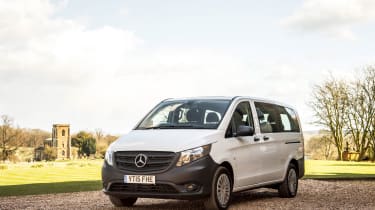 All the Mercedes Vito Tourer models get The BlueTec efficiency package that uses a special injection system to clean exhaust gasses to the latest Euro VI emissions standards. The entry-level 109 CDI unit returns 44.8mpg with 164g/km CO2 emissions while the 114 CDI is only slightly down with 43.5mpg and 171g/km. The Tourer's best figures come from the 187bhp 119 CDI range-topping engine that manages 47.1mpg and 158g/km.

Vito Tourer buyers can choose from entry-level Pro or higher spec Select trim levels. In the Pro versions you get a wipe-clean plastic floor, which may be practical but does lower the tone somewhat inside. Cruise control with a variable speed limiter is also standard, along with a smart multifunction steering wheel with trip computer and a high-resolution 5.8-inch TFT display that also looks a bit dated compared to the touchscreen units in rivals.

Plusher Select models get painted bumpers and alloy wheels that improve the look outside. Inside, it's the deluxe seats, proper carpets and climate controlled air-conditioning. The Tourer Select basically feels a lot more like a junior V-Class but you pay over £3,000 extra for the privilege. All models get Adaptive ESP, front, side and window airbags while rear window airbags are available as an option.