Luxury Mercedes V-Class MPV is classy inside, but van-like dynamics and high purchase price hold it back slightly 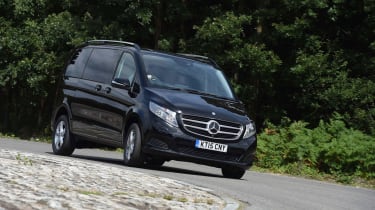 Having replaced the old Viano MPV, the Mercedes-Benz V-Class is a vast people carrier that offers masses of space mixed with high-end saloon car luxury. Mercedes has spruced up its Vito van, adding up to eight seats depending on configuration, and a much more premium interior that borrows lots of tech and design elements from elsewhere in the range.

There are two different body styles: a long wheelbase and an extra-long wheelbase. The former is available with seven seats only, while the latter is upgradable to eight seats if you need even more room for passengers. On top of that there are two trim levels – SE and Sport – and two engines to choose from, including the 220 Bluetec and 250 Bluetec turbodiesels.

Mercedes has dropped the V6 diesel from the Viano for this model, but go for the V250 and it’s actually faster and more economical than its predecessor.

Plenty of equipment comes as standard even on the entry-level SE, including sat-nav, Bluetooth, parking sensors with a reversing camera to help manoeuvre the massive machine, heated seats and crosswind assist.

Prices are competitive given the luxury and comfort on offer, too, although if you maximise the configuration for passenger space, it will impact on luggage room. There are lots of safety and technology packages you can add on as well if you want to increase the specification of the V-Class.

You can even get close to the level of technology available in the flagship S-Class, but no matter what, even the base-spec car feels upmarket and a cut above regular MPVs.

As it’s a step above the usual crop of people carriers, the V-Class’s main rival is the Volkswagen Caravelle, which is available in Executive and Business trim levels to match the Mercedes. However, its 178bhp 2.0-litre turbodiesel engine is no match for the more powerful 2.1-litre Merc motor.

The 2.1-litre diesel engine in the V-Class produces 187bhp and it's just as fast as the old 3.0-litre unit in the Viano. That means economy is up without sacrificing performance. The V-Class is actually pretty good in this department thanks to a brisk 0-62mph sprint time of just 9.1 seconds and 480Nm of torque available for overtaking. Work the engine hard, however, and it feels quite gruff, while the 7G-tronic automatic gearbox is showing its age.

With the Agility Select system fitted there are a handful of driving modes to choose from: Eco, Manual, Comfort and Sport. These change the throttle response and steering to suit your preference, but most will simply leave the car in Comfort mode, which best matches the car's nature. The gearbox is a bit lethargic and hangs onto gears too long, with jerky upshifts on occasion. Drop the car into Eco mode and the throttle response is dulled – it’s a bit too slow to be used all the time, while Sport mode is quick to change down into lower gears, which doesn't help economy.

It's comfortable in the most part, too, thanks to adaptive dampers that adjust to the road you're on, and the steering is light and easy to use in town as well. It still feels solid at high speed, but the faster you go the more brittle the chassis feels. 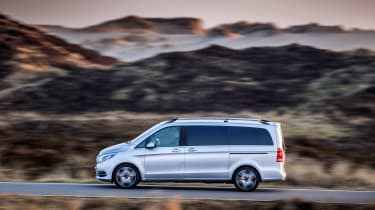 The conventional front suspension does a good job of filtering out bumps, but the van underpinnings at the rear mean the car sometimes thumps over expansion joints on the motorway.

The Mercedes V250 Bluetec we tested is a strong performer when it comes to economy, with emissions of 166g/km of CO2 and fuel economy of 44.8mpg. That's much better than the 37.2mpg and 199g/km you'll get from the equivalent VW Caravelle.

Those figures represent a massive improvement over the old Viano 3.0-litre V6 CDI model, too – so the new V-Class promises to be a class-leader when it comes to running costs.

Mercedes V-Class buyers probably aren't expecting their new model to look as good as the latest sports cars, and so it proves. Since the V-Class is a van-derived people carrier it inherits the boxy commercial vehicle shape and won’t be taking any awards home for its looks.

For a car of this type it has some nice features, however, with the new Mercedes family grille and prominent headlights giving it a distinctive look from the front. The large rear window does make the rear look quite droopy but the V-Class is available with some large alloy wheels to improve its profile.

The interior is the really important bit, and Mercedes has done rather well here – the V-Class gets a tablet-style central display, an intuitive touchpad controller and a smart two-piece floating dashboard design. It certainly looks the part, but just like the smaller Mercedes A-Class, there are some below-average plastics and rather flimsy build quality further back in the cabin.

The V-Class is available in two different lengths, with three seat layouts. The car comes with seven as standard, with eight seats in the extra-long version – although reverting back to the seven-seat arrangement is a no cost option. 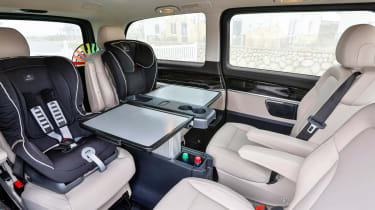 Boot space can be increased using the sliding rear seats, and that means legroom can be improved as well if you're carrying more passengers than luggage. However, slide the bench all the way back and the 610-litre quoted luggage capacity drops to a very small space. However, with a raised rear bench there is still enough room under the rear seats to stow suitcases and other bags. A split tailgate with power close function helps practicality even further, as do the electric sliding doors that open extremely wide giving excellent access to the rear of the cabin.

The glass rear hatch opens separately from the rest of the boot so you don’t have to spend ages finding a parking space big enough to swing open the huge tailgate. Plus, the sturdy parcel shelf comes with two collapsible shopping baskets to hold loose items firmly in place.

The diesel engine and automatic gearbox in the V-Class have been tried and tested in many Mercedes cars, so they should have had most of their problems ironed out. Mercedes managed a 11th place finish in the list of the top manufacturers in our 2015 Driver Power satisfaction survey, and that bodes well for the V-Class.

The latest V-Class model is full of active safety tech: it scored the full five stars in the Euro NCAP safety ratings as a result, improving on its predecessor's four-star score. 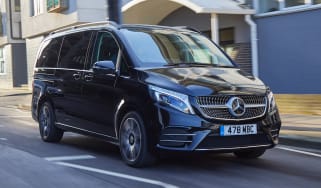 Need a six-seat S-Class for your execs? Mercedes might have the answer with its new V-Class, but it does have its drawbacks
New Mercedes V 300 d 2019 review 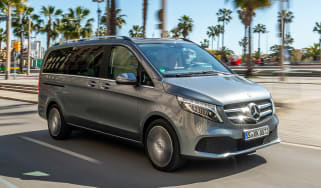 The Mercedes V-Class MPV has been facelifted for 2019, and with it comes a new powerful 236bhp diesel engine from the C-Class saloon
New Mercedes Marco Polo 2019 review 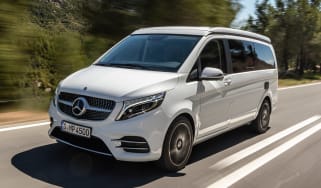 Is the refreshed Mercedes Marco Polo campervan a serious threat to the Volkswagen California? We find out..
New Mercedes 2019 V-Class facelift arrives with new engines and improved tech 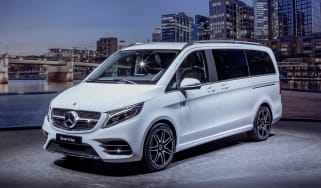 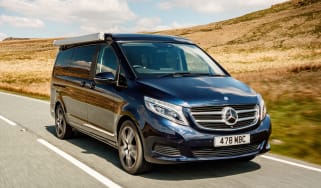 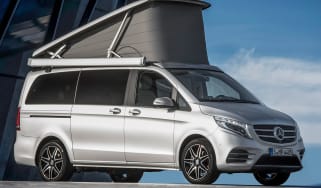 Classy home away from home is now on sale, with prices starting from £53,180 for an entry-level model
Mercedes V250 2015 review 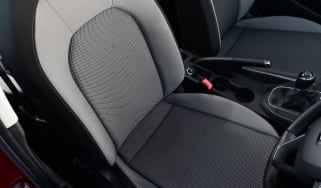 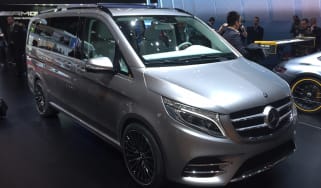 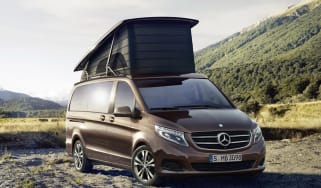 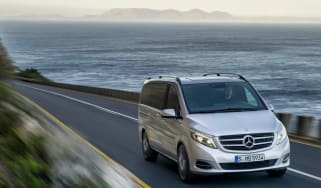