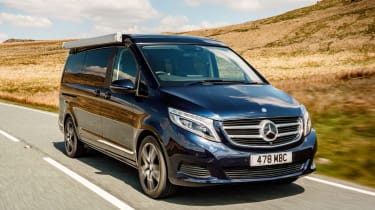 The Marco Polo is priced well above the entry-level VW California, so Merc’s offering doesn’t look particularly cheap. We’d be tempted by the more powerful V 250d, too, which takes the figure north of £55k. However, the Marco Polo does come with a generous standard equipment list and even the weaker of its engines is punchier than most of what’s offered in the VW, so anyone looking for a slightly plusher and more premium camper experience should certainly put the Merc on their shortlist.

The VW California has had things its own way in the ‘official camper van’ market for many years - but the Mercedes Marco Polo is designed to change all that. It’s based on Merc’s V-Class people carrier and despite being built for the maker by specialist Westfalia, it’s sold through regular dealers, and is just as much a part of the regular line-up as the A-Class and C-Class.

The basic premise of the Marco Polo is similar to the California; it has the traditional camper van layout of a side kitchen (complete with sink, two-ring gas hob and fridge), with seats and bed capacity for up to four people. The roof rises electrically on all editions, and the second row of seats inflates automatically when it’s being folded down into a bed.

All of this kit is standard, incidentally, along with Garmin sat-nav, some ambient lighting, three-zone climate control and an external camping table with two chairs - although we’d also be tempted to fork out the £1,345 for auxiliary heating, which would be a boon on cold British nights. 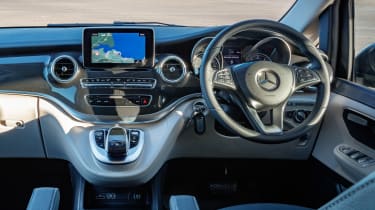 Two engine options are available - both four-cylinder diesels. The V 220d driven here is the entry point; it has 161bhp and 380Nm of torque, and manages average fuel economy of 44.8mpg with 166g/km of CO2 emissions. Step up to the V 250d and you get the same basic fuel consumption figure, while the CO2 emissions only nudge up to 169g/km. Crucially, however, you 187bhp and an additional 60Nm of torque on tap. There’s only a single transmission: a seven-speed automatic set-up.

Lots of how the Marco Polo operates is similar to the California - but that’s no bad thing because the VW’s success has been achieved through its simplicity and ease of use. Turning the driver’s seat around to face the rear cabin takes only a few seconds, and while the left-hand pew takes a little bit more practice due to the need to clear the corner of the kitchen cabinet, it’s still pretty easy.

The conversion to overnight accommodation is a doddle, too; the roof takes around 30 seconds to expand fully and there’s a simple LED light pre-installed up there to help you clamber up to bed if you’re parked in the middle of a gloomy field. A pair of switches operates the main bed downstairs, and it slides back and forth easily to prioritise boot capacity or living space. Choose that auxiliary heater and you’ll be able to control it from your key fob, too - or set it to come on at pre-determined slots during the night.

As you’d expect, the Marco Polo scores well on storage. There are cutlery drawers at the front of the kitchen, a sliding door reveals a main cabinet with shelving, and at the rear there’s a taller wardrobe that includes a rail for coat hangers. There’s storage below the rear seats - enough for a couple of pillows or the curtains - and a further cupboard in the ceiling towards the front of the load bay. Merc sells a number of additional attachments, including a shower unit for hosing off sand after a surfing session, and bicycle racks.

On the road, the V 220d Marco Polo is an accomplished cruiser. The 2.1-litre diesel has a fair amount of weight to shift when you’re pulling away and you’ll need to show a little patience unless you want the gearbox to send the revs soaring. Do that and the diesel motor can sound coarse. But at a steady 65mph on the straight and level, you won’t have to shout over anything from the engine bay - and if you adopt a smooth driving style, you’ll find the gearbox an intelligent assistant. 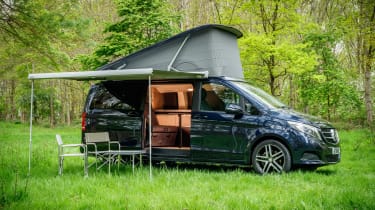 The Marco Polo’s mass also affects braking and handling. You’ll soon learn to factor in a bit of extra stopping time to reflect the fact that you’re pulling almost two and a half tonnes to a halt. Don’t expect it to leap around deftly between corners, either; the suspension set-up is focused on comfort. It succeeds in that, soaking up all but the worst road imperfections with barely a clatter from the china cups in the kitchen cabinet. The steering is a bit slow, but it’s nicely weighted and consistent, making it easy to place what is a relatively large vehicle with confidence.

In any case, it’s hard to resent such conservative driving manners when you’re hauling around your overnight accommodation. As with the California, purchasing a Marco Polo means you’re buying into a lifestyle as much as four wheels and an engine.