The Citroen C-Zero is an electric car for early adopters, but there's definitely a price to pay for zero emissions driving 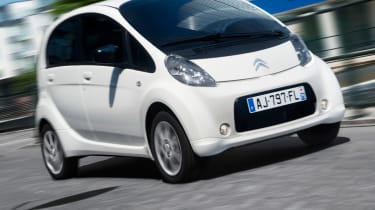 The Citroen C-Zero is the result of a joint venture with Mitsubishi and it's easy to see that the C-Zero is related to the i-MiEV. It's essentially the same car with Citroen badges, and the 66bhp electric powertrain remains the same too, which means 0-62mph will take around 15 seconds, but accleration from 0-30mph is surprisingly quick. The oddly shaped car boasts a spacious cabin with room enough for four adults, but drivers will have to think long and hard about whether an electric car is for them. The range of 93 miles quickly falls to something nearer to 60 miles in everyday driving, and there are still very few places to charge the C-Zero. Even when one is found it takes as much as seven hours to fully recharge the batteries.

The Citroen C-Zero accelerates quickly up to around 30mph, but then acceleration tails off. That initial burst of acceleration makes it ideal for busy city driving, while the automatic gearbox and silent electric motor also make it very relaxing to drive in stop-start traffic. The handling isn't great because the steering is a little vague, and there's enough body roll in the corners to dissuade drivers from taking corners too fast.

Citroen claims that the C-Zero will travel 93 miles on a full charge, but in our experience that figure is more like 60 miles. On the plus side a full recharge of the batteries will cost £2 (depending on when you charge it), making it far cheaper than filling up with fuel. The zero CO2 emissions also ensure it's free from road tax, and drivers can also avoid the £10 a day congestion charge in central London.

The Citroen C-Zero looks practically identical to the Mitsubishi i-MiEV on which it is based, except for the addition of Citroen badges front and rear. That means the high-roofed, narrow jellybean design features, which is good for aerodynamics and interior space, but not great for turning heads. On the plus side if you want to drive an electric car without shouting about the fact, then there are few clues that this is an electric vehicle.

The most impractical thing about the C-Zero is the limited range. Owners will need to have access to a plug socket wherever they park their car, because the everyday 60-mile range really limits the journeys you can make. In terms of space, the C-Zero is pretty good. The tall roof provides a surprising amount of space in the cabin and the boot is big enough for a day's shopping.

Although many buyers may be worried about the reliability of electric cars, they're actually far more simple than combustion-engined cars, thanks to the fact they use fewer moving parts. Safety isn't excellent, with Euro NCAP awarding the C-Zero four stars rather than a full complement of five stars in its safety tests.