Most mid-term facelifts involve a slight tweak to a car's bonnet profile, some new headlamp lenses and maybe a bit of a spruce-up to the cabin. But Citroen has done a lot more to its revised C5, which is now available in the UK. 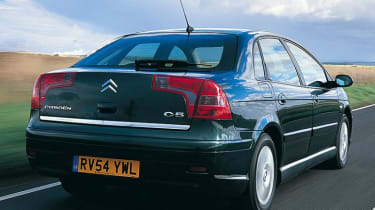 The C5 won't suit enthusiastic drivers, but its smooth ride and quiet engine are ideal for motorways, so it will appeal to high-milers. Hefty discounts - such as the zero per cent finance available from launch - will be needed to tempt private buyers.

Most mid-term facelifts involve a slight tweak to a car's bonnet profile, some new headlamp lenses and maybe a bit of a spruce-up to the cabin. But Citroen has done a lot more to its revised C5, which is now available in the UK.

Instead of a mild makeover, the facelifted model gets the family nose seen for the first time on the C-Airlounge and C-Airdream concepts - and in our view, it looks much better for it. The swept-back headlights and boomerang-style tail-lamp clusters, along with the double-chevron grille, really sharpen things up.

However, just as the previous version was all about comfort, so it is with this model. And if it's refinement you're after, then the 2.0-litre HDi diesel engine is by far the best option. This is the same powerplant we have praised before in the Peugeot 407, because it's very smooth at cruising speeds.

While it can't match the responsiveness of some oil-burning rivals, it's not sluggish, and the large torque reserves allow the Citroen to keep up with traffic effortlessly. There's also a new six-speed gearbox, although its rubbery shift action doesn't encourage swift changes.

But this isn't the only oil-burning C5 available, as the range now includes a new 1.6-litre derv model, which we drove in LHD guise in Issue 825, along with the old 2.2-litre. For those on a budget, we'd recommend the smaller-capacity unit, although the car sampled here should appeal to a wider range of buyers as it's more flexible. With a combined fuel economy figure of 47.1mpg, it's certainly not expensive to run.

Citroen's quirky Hydractive suspension has also been revised, to the point where the C5's ride is even smoother than before. But the company hasn't managed to improve what has always been a weak point on its family model - the cornering ability. The steering is still too lifeless and vague, and it's genuinely difficult to tell what's going on at the front wheels. Having said that, the suspension does keep body roll surprisingly in check for such a soft car.

Inside, the changes are more limited, although the C5 does get a new centre console and a different typeface for the dials. It's disappointing, though, that the cheap, hard plastics which adorned the previous model are still present.

But the firm is concentrating on safety these days, so all models get seven airbags as standard, plus an innovative lane-departure warning system. This makes the seat vibrate if the car detects itself drifting over a white line, and is designed to stop drivers falling asleep at the wheel. All this, plus extra front and rear overhangs for crash protection, means a five-star rating in Euro NCAP crash tests is expected.

At £17,795, the C5 represents reasonable value for money in its class, but it will only appear attractive against rivals when Citroen's trademark VAT-free and cashback deals are applied.