We load up in base estate to see if it makes a big impression on rivals... 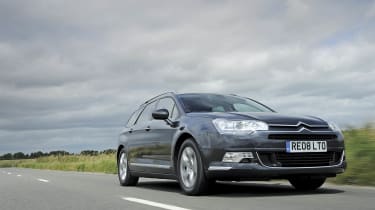 The C5 Tourer SX is better equipped and cheaper than the equivalent BMW 3-Series Touring, yet offers the space of the 5-Series estate. While it can’t quite match the Ford Mondeo dynamically and the petrol engine has to be worked hard, it makes a comfortable motorway cruiser. Couple this with the strides Citroen has made in terms of quality, and the fact that the car isn’t German will be enough to win over a new generation of converts to the brand.

And it proved to be more than hype when we drove the Tourer version in top-spec Exclusive trim at its UK debut last month. But is it true of lesser models in the range? The entry-level SX estate retains the handsome looks of more expensive variants. Although our car was equipped with the optional 17-inch alloy wheels, the standard 16-inch steel rims don’t detract from the Tourer’s stylish appearance.

From the front, it shares the family face of the C5 saloon, while the metal grafted on to the rear works well, too. There is no disguising the car’s size, however – it’s nearly as long as a BMW 5-Series.

As you would expect, the Tourer boasts an impressive amount of luggage space. The detailing is also superb, with clever touches such as an interior light which can be removed and used as a torch. What lets it down, though, is the tailgate opening, which is a little narrow. When buyers are likely to choose this car with load-lugging in mind, this is a significant oversight.

In SX guise, the C5 is very well equipped. Climate and cruise control are standard, while the seats are among the most comfortable on the market. And all this helps to reinforce the idea that the car really is a quality product, and a big step forward for the brand.

The pursuit of German-style perfection hasn’t seen Citroen turn its back on its cabin design cues, though – most notable being the fixed boss in the centre of the steering wheel. This carries switches for the stereo and cruise control, and makes the systems easier to use. But while the MMI and iDrive cabin control set-ups offered by Audi and BMW respectively reduce switchgear, the C5’s centre console is still cluttered with buttons – many of which replicate the functions of those in the steering wheel.

And that’s not our only gripe with the C5’s cabin. Away from the load bay, not enough thought seems to have gone into how families will use this car, as cubbyholes and cup-holders are in surprisingly short supply.

Given Citroen’s reputation for building fine diesel engines, most buyers will opt for an HDi oil-burner. But our car’s 127bhp 1.8-litre petrol powerplant does a decent enough job of moving the Tourer’s 1,549kg body around. It won’t win any performance awards – the sprint from 0-62mph is completed in 12.8 seconds – but once up to motorway speeds, the estate is an incredibly refined cruiser.

The SX model makes do with steel springs, rather than the Hydractive hydro-pneumatic suspension system found on top-spec cars. The conventional set-up doesn’t provide such a comfortable ride, but the trade-off is a more engaging driving experience. Although it retains the sharp turn-in of models further up the range, it doesn’t suffer so much from body roll.

With the C5 Tourer, Citroen has made significant gains on its class-leading German rivals. Some issues with quality and cabin ergonomics need to be addressed, and while the new model handles better, it still won’t satisfy keen drivers. But the company’s flair shines through in this much improved package – so even in SX trim, the C5 is capable of luring customers away from the best estates in the family car class.

Rival: Laguna Sport Tourer not the prettiest car, but the Renault runs the C5 close. Despite being called the Sport Tourer, the Laguna estate puts comfort before performance. And while it’s more expensive, it’s similarly specced and has a larger, more potent engine.