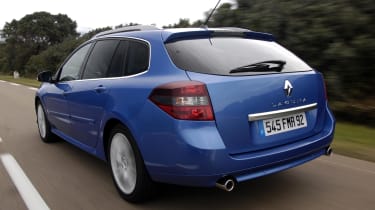 Renault’s new diesel engine provides punchy performance and decent refinement, making it the unit of choice for the new GT. The Active Drive chassis is very effective, too. It improves both safety and handling, and ensures the big Sport Tourer is incredibly nimble on the move. However, when packaged with flagship GT trim, it means the Laguna is an expensive car – and it still doesn’t involve the driver in quite the same way as more talented rivals do.

The Honda Accord isn’t the only model on a mission to prove its credentials in the family car market. Even though Renault’s latest Laguna has been around since last year, the flagship GT arrives in May.

It debuts the firm’s Active Drive set-up, which uses clever electronics to help steer the rear wheels. We’ve been impressed with the five-door petrol, so how does it rate in practical diesel Sport Tourer guise?

As with the hatch, you get racy additions including a revised front bumper, alloy wheels, smoked rear light lenses and glossy black door mirrors. The result is smart, without being over the top. But the chassis is what this car is all about.

At low speeds, the Active Drive system is tuned to aid manoeuvrability, so the rear wheels steer in the opposite direction to those at the front. As a result, the GT’s turning circle is reduced by 10 per cent – that’s the same as a Clio supermini! However, once you’re above speeds of 38mph, the rear wheels move in the same direction as those at the front to improve stability.

On the road, you find yourself using less steering lock than you would in a conventional Laguna. While the maximum turn angle of three degrees for the rear wheels is invisible from the outside, you feel the benefits with faster cornering and increased stability – although the steering still lacks feel.

However, the new oil-burner is a solid performer. Smooth, responsive and refined, it propels the Laguna from 0-62mph in 8.8 seconds. The petrol turbo model is faster, but economy of 42.2mpg makes the diesel the best choice – especially as it will cost only £170 more to buy.

Rival: Saab 9-3 1.9 TTiD While it’s smaller than the Accord, the 9-3 also has a powerful, frugal diesel, and is well equipped. Its blend of individual style and brand image is similar to the Honda’s, too.