A styling update and a superb diesel engine promise to make the 2011 Renault Laguna a real class contender, we were first behind the wheel to see how it stacks up. 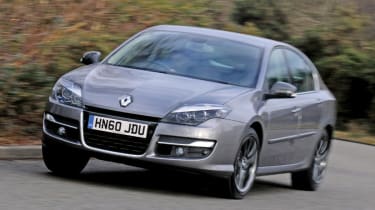 All Renault’s GT Line cars make a valiant attempt to capture some of the joie de vivre of the firm’s pacy Renaultsport models. But while they look the part, the racy suspension settings don’t suit the Laguna. Buyers searching for a quiet and comfortable cruiser with a beautifully smooth engine should certainly check out the standard Dynamique model, though – this offers plenty of kit and is good value, costing £1,700 less than this range-topper. p.p1 {margin: 0.0px 0.0px 0.0px 0.0px; line-height: 10.0px; font: 8.0px 'MetaMediumLF-Roman'} span.s1 {letter-spacing: -0.1px} span.s2 {letter-spacing: -0.2px}

The latest Laguna is turning on the style! We drove the flagship estate version in Issue 1,146 and found it a bit of a mixed bag – so does the sleeker hatchback fare any better?
The visual changes are certainly welcome, with aggressive new additions such as twin exhausts, 18-inch Interlagos alloys and chrome highlights. Along with new metallic ‘eyebrows’ over the headlamps, they make the Renault more striking than before, especially in this GT Line trim.
Inside, the cabin is a pleasant place in which to spend time, with high-quality materials and a logical layout. This model gets plenty of equipment, including extremely comfortable front seats which are trimmed in leather and grey Alcantara suede.
The integrated TomTom sat-nav is excellent, giving real-time traffic info and speed camera warnings. It’s controlled via a handy joystick which sits just below the driver’s armrest.
The 148bhp diesel engine is definitely the hatchback’s strongest asset, though. It’s a detuned version of the 178bhp 2.0-litre dCi unit used in the range-topping versions, and is pleasingly quick and refined. In fact, Renault claims that at high speed, engine noise has been cut by 40 per cent, improving motorway cruising ability. Its superior fuel economy and emissions figures render the more powerful variant slightly redundant, too – especially as this model will cost you £45 less in road tax every year, at £110.
While the oil-burner’s smooth character is suited to long, high-speed journeys, unfortunately the combination of those big alloy wheels and the newly stiffened springs makes for a jittery ride. It’s not overly uncomfortable, yet the lack of finesse is something that would really begin to grate on extended trips, and it isn’t what you would expect from a big French saloon.
The 150 dCi does without the innovative 4Control active steering of the 178bhp version, and feels a little cumbersome by comparison. The system has been fitted with a quicker rack, but compared to the flagship it takes extra effort to move yet seems no more direct, and the whole car is less eager to turn into corners as a result.
When you do up the pace, there is plenty of grip on offer. Yet despite the suspension updates and thicker anti-roll bars, the Laguna still leans heavily into corners.
It also trails behind its rivals in terms of interior space. The 450-litre load area is below average, and although the new, slimmer front seats have freed up plenty of legroom in the back, adult passengers will still find their heads brush the rooflining. This is a real shame – as these small details spoil what should be a genuine class contender.
Rival: Volkswagen Passat
with its 2.0-litre TDI diesel, the revised Passat is less powerful than the Renault, but BlueMotion technology ensures it’s more economical, offering 60mpg-plus.
Share this on TwitterShare this on FacebookEmail