French firm has addressed criticism of family car. but is it now a real Mondeo rival? 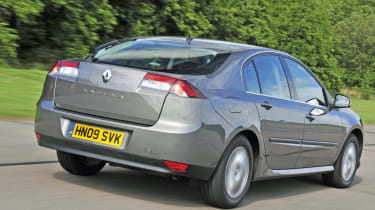 Renault has done well to address the criticisms of its family car. Styling has been taken up a notch, while the well built cabin and thrifty engines keep the model up to date. Unfortunately, barring impeccable safety credentials, the Laguna fails to shine in any one area. The dynamics are unengaging, while the design is still over-cautious. The saloon market has moved on, and this Renault has been left behind.

The changes might not be obvious at first, but this is the revised Laguna for 2010. More aggressive styling, a hike in quality and an even cleaner line-up of engines are all aimed at making the Ford Mondeo rival stand out from the crowd.

Anyone considering taking the plunge will be pleased to hear that there’s a more simple four-model range. So, buyers get a choice of Expression, Dynamique, TomTom Edition (Dynamique with sat-nav) and top-spec Initiale.

Equipment is generous, even in the base cars, with 16-inch alloy wheels, air-conditioning and a surround sound stereo as standard. The best-selling Dynamique and TomTom now get a number of sporty cues from the previous GT version.

These include a resculpted front bumper with gill-like air intakes ahead of the front wheels, black-surround headlamps, smoked rear lights and pearl-finish wing mirrors.

Judging by our TomTom-spec car, the alterations definitely result in a more dynamic look.

However, considering that the Laguna’s styling was far from radical to begin with, Renault could have easily taken the facelift further.

Meanwhile, the cabin has always been the best feature of this model, especially when it incorporates the optional Premium Pack.

Costing an additional £1,200, this adds electric and heated Alcantara-trimmed sports seats – and makes the Laguna an extremely comfortable place in which to spend time.

The materials and switchgear feel solid to the touch, while the built-in sat-nav is the best interface around for ease of use, and a snip at £360.

Unfortunately, things are not as impressive in the back, where leg and headroom aren’t nearly as generous as in some rivals.

However, the fold-flat rear seats and wide-opening hatch layout have the edge over some more traditional saloons.

Renault has distributed its eco2 badge – which is reserved for models which emit less than 140g/km of CO2 – liberally across the Laguna range.

While there’s no denying this motor’s eco-credentials, the small-capacity oil-burner feels a little out of its depth in the big hatch.

It’s certainly smooth enough in most circumstances, but it lacks flexibility and feels totally flat below 2,000rpm. Under full acceleration, refinement is poor, too.

The only way to drive this car effectively is on part-throttle, exploiting the mid-range torque; in any other situation, it falls short.

Instead, we would go for the best-selling 148bhp 2.0 dCi. Thanks to an ECU remap, revised gear ratios and variable power-steering, this is now part of the eco2 family, emitting only 138g/km.

Elsewhere, the new Laguna retains the impressive safety features of its predecessor, which scored 36 out of 37 in its Euro NCAP crash test.

But unfortunately, that’s the only area in which it shines.

It’s a well made, frugal family car, yet competition is tough in this sector – and even with a raft of 2010 updates, the Laguna is left trailing by more talented rivals.

Rival: Citroen C5 The quirky C5 can’t match the likes of the Ford Mondeo for driving thrills, yet it offers class-leading comfort and refinement.

Plus, unlike its predecessor, the C5 is now a stylish choice, too.