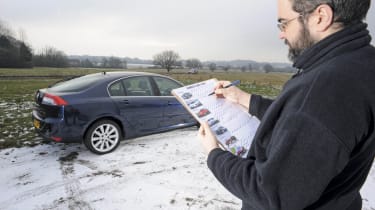 When I was a kid, I would while away long car journeys with a copy of spotting book I-Spy. I kept on the lookout for all sorts of vehicles – trucks, sports cars, farmyard machinery, aeroplanes – in an effort to fill the book.

That’s nothing unusual, but thanks to our long-term Renault Laguna, I’ve taken up the hobby again. However, rather than spotting all sorts of vehicles, I’m on the hunt for a specific motor. Namely another Laguna!

When it comes to family cars, the checklist in the main picture gives you an idea of which models I see frequently. The Ford Mondeo is miles ahead, while the VW Passat and Peugeot 407 score highly because they have been on sale for a few years. However, the Laguna, which has been around since late 2007, is trailing the latest versions of the Honda Accord and Citroen C5, which were both launched last summer!

But why have I seen so few? The last Laguna was popular, so where has Renault gone wrong? There’s not much to dislike from behind the wheel. It’s a comfortable long-distance commuter, while our Dynamique S model is packed with goodies.

People could be put off by Renault’s poor showing in Auto Express’s Driver Power dealer surveys; the firm came last of 30 in 2008. However, the Laguna’s 12,500-mile check-up, carried out by Renault London in Acton, was perfect.

Staff kept me informed of what was going on, and even waited until after hours so I could collect the car the same day. The only sting in the tail was the £638 bill, although £300 of that was for the urgent replacement of a punctured tyre. I have one theory about the Laguna’s rarity: its looks. The nose isn’t exactly attractive, with its gaping under-bumper grille and close-set headlights. The rear is better, but compared to other hatches, the Laguna is left trailing. And it seems that Renault’s designers agree, as a facelifted model is due soon.

In fact, I’m sure my theory is right. On my final journey in the Laguna before it went back to Renault, I was playing my usual I-Spy game, when I spotted a familiar, if slightly smoother shape. It was a new Laguna Coupé, barely days after the model had gone on sale!

I agree with Dean that the Laguna is great on the motorway, and there’s plenty of kit, from cruise control and sat-nav, to auto lights and wipers. But there are a couple of glaring omissions. Unlike rivals, such as the VW Passat, the Laguna’s electric parking brake doesn’t have an auto hold function for hill starts. And while the Renault eliminates a lot of driving chores, you still have to dip the rear view mirror manually.