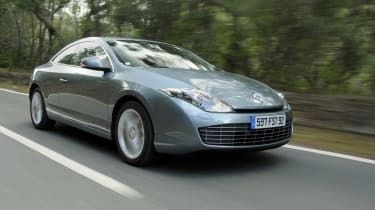 The new Laguna Coupé is a great-looking car, and the luxurious interior is a match for any rival. However,the combination of a firm ride,plusmore impressive performance and fuel economy figures from its diesel stablemate, ensurethat the flagship petrol version fails to realise its full potential.Given the choice, we wouldhappily pay the £500 premium and go for the diesel model every time.

Meet the range-topping petrol version of Renault's stylish new Laguna Coupé. Packing a 3.5-litre V6 under the bonnet, this is the best-looking car Renault has built in a long time!

Sporting a chunky bodykit, it's nearly as dramatic as the original coupé concept unveiled back in 2007 at the Frankfurt Motor Show.

And it's a similar story inside, where the plush leather seats offer ahighly adaptable driving position.

On the road, it's hard to distinguish between the petrol and diesel which we drove last month. Both are surprisingly quiet, but the petrol offers 120Nm less torque, which affects performance - making it a tenth of a second slower in the sprint from 0-62mph at 7.4 seconds.

And it comes further unstuck on emissions and fuel consumption. The £27,445 V6 emits 238g/km, which is 46g/km more than the diesel. That puts it into band G -and means you'll pay £155 more in road tax next year. It also consumes 25 per cent more fuel, with an economy figure of 28.2mpg.

And this, ultimately, seals its fate. Compared to the diesel, the petrol simply doesn't stack up!