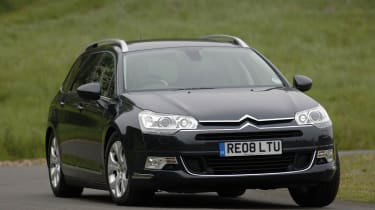 By turning its C5 into an estate, Citroen has created a great looker. And while it’s not one of the biggest load-luggers, the hydro-pneumatic suspension makes it one of the most versatile around. As with the saloon, the Tourer is beaten by rivals such as the Mondeo for driving thrills, yet offers class-leading comfort and refinement. If you don’t need seven-seats, but want a large, stylish family holdall, it merits serious consideration.

Not long ago, if you wanted a practical family model, you’d choose an estate. But in recent years, buyers have been tempted instead by the versatility and flexibility of MPVs.

So, in an effort to regain attention in the space race, estate cars have turned on the style. Among the rakish models currently on offer are the all-new Audi A4 Avant, plus the latest load-lugging Mercedes C-Class, Volks­wagen Passat and Ford Mondeo.

The latest to join the party is the Citroen C5 Tourer. Hoping to build on the success of the recently introduced saloon, the neat newcomer promises a winning blend of desirability and practicality, taking it head-to-head with prestige and mainstream rivals.

There’s no denying that the transition from four-door to estate has been a success – the Tourer is arguably the most handsome model in the French firm’s line-up. It’s identical to the saloon from nose to B-pillar, but beyond that it is all-new.

There’s a long, gently sloping roof­line and distinctive window profile that benefits from a neat kink in the rearmost side panels. Completing the look are large wraparound tail-lamps and metallic-finish roof rails.

The Tourer isn’t just a pretty face, though. Open the electrically powered upright tailgate on this range-topping Exclusive model, and you will find a 505-litre boot. Fold the rear bench flat and this grows to 1,462 litres – that trumps the A4 and Passat, but falls some way short of the Ford’s impressive 1,745-litre capacity. It’s also 196 litres less than the C5’s rather ungainly predecessor.

However, the Citroen does have a neat trick up its sleeve, courtesy of the firm’s trademark hydro-pneumatic suspension. It can be raised and lowered via a switch in the boot, thus taking the strain out of loading awkward items or hooking up a trailer to the optional, retractable tow bar. Lower-spec versions come with conventional steel springs.

Other neat touches in the luggage area include a 12V power socket, a number of hidden cubbyholes and a recharge­able torch. The latter comes in handy as a boot light.

Elsewhere, the Tourer is identical to its saloon brother. The interior is carried straight over, and features the same high-quality materials.But while overall fit and finish are good, some of the minor controls can be fiddly as a result of small, tightly packed buttons.

Still, the cabin is both spacious and well insulated – the special acoustic glass and thick doors make a good job of filtering out wind noise. And out on the road, the Tourer offers a typically Citroen driving experience.

The electronically controlled Hyd­ractive 3+ suspension provides the car with excellent long-distance com­fort, thanks to a cosseting, refined ride. Better still, its self-levelling func­tion means the chassis retains its composure even when the boot has been filled to capacity.

Push hard into a corner, and it’s clear the newcomer lacks the driver appeal of some rivals. While the steering is very direct, it’s overly light and short on feel. There is also too much body roll, even when the suspension is in sport mode.

But progress is still surprisingly rapid in the C5, particularly when it’s fitted with the torquey and refined 2.2-litre turbodiesel in our car. This is mated to the new slick-shifting six-speed manual gearbox, and pro­mises 42.8mpg economy – it’s one of the best oil-burners around.