The new Citroen DS 5LS has been revealed, a luxury saloon for the Chinese market 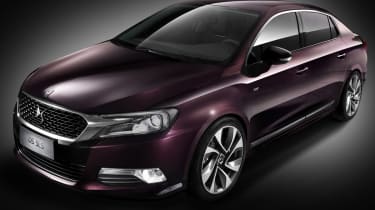 Citroen has taken the covers off its latest ‘DS’ model at an event in Paris. The new Citroen DS 5LS saloon is based on the DS5 and will be built and sold exclusively in China.

The ‘LS’ in the name stands for ‘Luxury Saloon’ and it will be the second DS model to be built at the new plant in Shenzhen after the DS5, as the brand gambles heavily on a sales boom in the rapidly expanding Chinese market.

Featuring a design clearly inspired by the Wild Rubis concept shown at the Shanghai Motor Show this year, the DS 5LS has a stylish exterior with chrome ‘wings’ at the front that circle the grille and extend into the headlights.

This feature is destined to be the new face of the successful DS sub-brand, and it will appear on all future DS-branded models including the new Citroen DS3 and a China-only SUV that is also due to arrive later on in 2014.

The three-box design has more in common with the C5 saloon than the DS5, but it shares the smart alloy wheels and twin exhausts with its premium sibling. At 4.7 metres long with a 2.7-metre wheelbase, Citroen claims the DS 5LS will offer best-in-class legroom, to help attract those buyers who wish to be chauffeured. That's 0.2 metres longer than the DS5 it's based on, and the extra room means the boot is 466 litres - one litre bigger than the DS5.

Inside, it has the same flat-bottomed steering wheel and a mixture of wood, leather and soft-touch plastics designed to give a luxurious feel. The centre console is titled towards the driver, and gadgets like massaging seats, an air purifier, reversing camera and DVD player are all included on top-spec cars.

Three petrol engine variants will be offered: a 1.6-litre petrol turbo engine with 158 or 197bhp and a 132bhp VTi engine. The 1.6 engine will power the front wheels via a six-speed automatic gearbox with a conventional torque converter, though there's no word on the VTi yet.

Citroen sees its main European rivals in China as the Mercedes CLA and Audi A3 Saloon, which are also about to be produced locally to avoid the heavy state taxes on imported vehicles. The Citroen 'C' range of cars is sold in Chinda under partnership with Dongfeng, but this new DS venture will be compeltely seperate from that.

Production is due to start in March, and the DS 5LS is due to appear at the Beijing Motor Show in April for its official home market unveiling. As well as an SUV, a larger executive saloon based on the DS9 concept will also arrive in 2015.

The bigger número 9 concept is here too, which still looks great. Wonderful surfacing and shape. Build it please. pic.twitter.com/wP4kyRitrL

The DS brand is aiming to establish itself as a key player in China, with a plan to reach 200,000 sales and bring production at the plant to capacity by 2015. Fifty DS ‘stores’ are also planned to open in the biggest Chinese cities, to help whip up excitement and brand loyalty in the country to go with the product offensive.