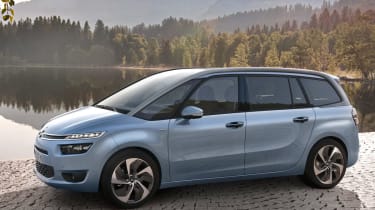 These are the first official pictures of the new Citroen Grand C4 Picasso. Aimed at families who need something even more spacious than the standard C4 Picasso, the seven-seater goes on sale in the UK next January.

The Grand C4 Picasso marks itself out from the five-seat model thanks to a unique high-tech front end (including a chevron grille that completely surround the LED daytime running lights and a split lower grille) and innovative 'boomerang' LED lights at the rear, while the most efficient model in the range emits just 98g/km of CO2.

Based on the new EMP2 platform, which will underpin a range of future Citroen and Peugeot cars, including the upcoming Peugeot 308, the Grand C4 Picasso benefits from a 110kg weight reduction over its predecessor. Despite being the same dimensions as the car it replaces, engineers have been able to extend the wheelbase.

In addition to the new EMP2 platform, Citroen has introduced a new engine to the Grand C4 Picasso range. The new BlueHDi 150 engine emits only 110g/km of CO2. Performance should be further improved by the new six-speed automated manual gearbox available with 1.6-litre e-HDi 90 and e-HDi 115 diesel engines.

Standard kit includes a panoramic windscreen, while a large glass roof is optional. A whole host of buttons and switches have been replaced with a 7-inch touchscreen and a 12-inch digital instrument panel. The seats are also asymmetrically designed which gives them the appearance of a sofa, while the seats in row two are all independent of one another.