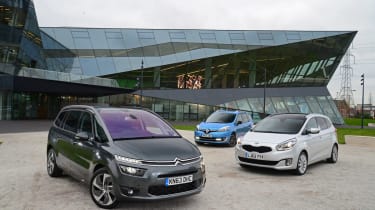 It wasn’t long ago that MPVs like the Citroen Grand C4 Picasso were little more than boxes on wheels, designed to deliver as much interior space as possible.

However, the family car class has become hugely fragmented, with buyers able to choose from traditional hatches, rugged off-roaders, practical estates and trendy crossovers. So the latest people carriers are out to prove they have style as well as substance.

Citroen’s new C4 Picasso is already a road test winner in five-seat guise. With its bold styling, the new seven-seat Grand C4 aims to inject desirability into the sensible MPV market. But it faces tough competition from the latest Kia Carens. All-new from the ground up, the Kia has impressed with its quality and value.

The newcomers also have to take on the recently revised Renault Grand Scenic. Still a strong contender, the Scenic is the cheapest car here and has the biggest boot. So which of this trio is going to start 2014 in winning ways? 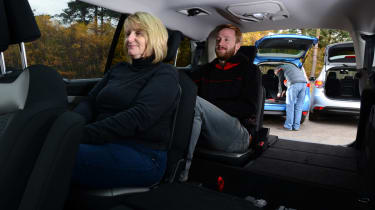 Most buyers in this class only use the third row of seats occasionally. None of the cars in this test has space in the back for adults to sit comfortably – for that you’d need a SEAT Alhambra or Ford Galaxy.

However, the extra flexibility is a big part of this trio’s appeal. The Renault has most room, but the Citroen isn’t far behind. The Kia is a bit tighter, although there’s enough room for kids.

Rather than folding flat, the Scenic’s middle-row seats tumble forward and can be removed altogether. This gives you a bigger van-like space, but they’re heavy to lift out and you’ll need somewhere to store them.

The Carens 3 comes with some luxury kit, too, including a heated steering wheel and heated electric front seats. Opt for Renault’s £650 Technology Pack, and you get a rear parking camera and lane departure warning. 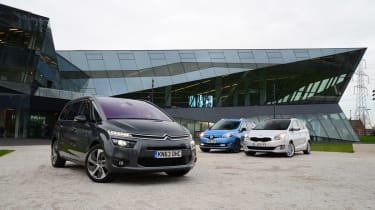 The C4 Grand Picasso’s innovative looks and cabin combine with a practical seat layout and decent luggage space to create a compelling MPV. A comfortable driving experience and clean engines are the icing on the cake, however Exclusive+ trim is expensive and electrical glitches remain a concern.

With lots of passenger space and plenty of clever storage, the Grand Scenic’s cabin is just as practical as the Citroen’s, while the dCi engine blends strong performance and low emissions.

It’s good value, too. But the slightly dated cabin and non-fold-flat seats consign it to second place.

Like the Renault, the Kia wasn’t far behind our winner. It’s slightly smaller than its rivals, but with loads of standard kit and a well built, functional cabin, it should be your choice if ultimate space isn’t priority number one. What also pegs it in third place are relatively high emissions.