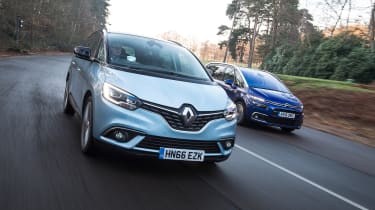 Renault has focused more heavily on SUVs and crossovers over the past few years, following the general trend for bigger cars, and to help maximise profits. But it hasn’t forgotten its status as an MPV pioneer, with models like the Grand Scenic catering for large families.

Now there’s a new seven-seat Grand Scenic on offer, sporting some clever practicality features and a slick new design that also means you don’t have to sacrifice style.

However, there’s one rather imposing hurdle the Renault will have to vault to secure victory. Citroen’s Grand C4 Picasso is our favourite large MPV and has seen off challenges from rivals like the Ford S-MAX and the BMW 2 Series Gran Tourer. Can the Grand Scenic succeed where its rivals couldn’t? 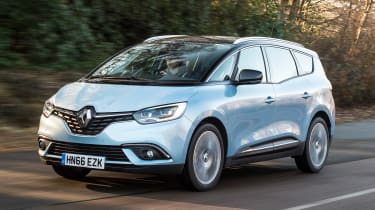 Space is a key commodity in the world of MPVs, and Renault has pushed the boundaries of what the Grand Scenic offers by boosting its size. It’s only a slight growth, but compared with the third-generation car it replaces, this new model is now 75mm longer and 25mm wider, with a 35mm longer wheelbase to provide more passenger room.

It also sits 15mm higher, with 30mm more ground clearance, giving the Grand Scenic a hint of SUV in its stance compared with the Citroen, which sticks to the conventional MPV recipe more readily.

A standard panoramic roof on our Dynamique S Nav test car helps the cabin feel roomy in the front, while legroom in the rear is also fairly generous. However, although the middle row of seats slides forward and back, it’s split 60:40, whereas the Grand C4 Picasso’s seats move independently. 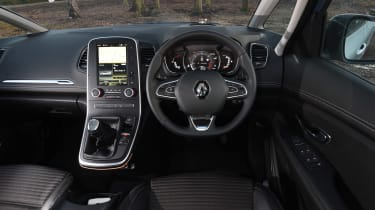 In the Renault, you’ll need to have them fairly far forward to accommodate adult passengers in the rear, too, and even then, it’s tighter in the third row than in the Citroen. This affects room in the middle, which undermines that otherwise spacious feel.

It doesn’t help that the floor feels quite high, so your legs sit in a less relaxing position. It’s not quite as pronounced in the middle row, but due to the sizeable underfloor storage bins behind the front seats, the floor encroaches more than in the C4. Still, standard one-touch folding seats, activated from switches in the boot, do mean it’s a simpler job to maximise the MPV’s load space than in the Citroen.

Dynamique S Nav trim gets a standard 8.7-inch portrait-style touchscreen (which also controls the seat folding mechanism), with sat-nav featuring TomTom Live services, DAB radio and Bluetooth all fitted as part of Renault’s R-Link 2 infotainment system. It’s a slick-looking unit, but can be tricky to use on the go. Thankfully, there is a range of apps available to make the car easier to get on with. 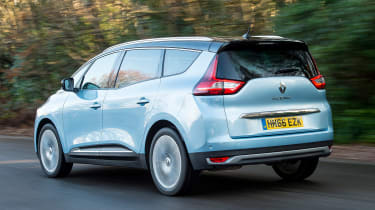 The Grand Scenic has a firmer ride than its rival, so it’s not quite as easy to live with on the road, although those 20-inch alloys and the stiffer suspension set-up mean the Grand Scenic is surprisingly good to drive for a large seven-seater. There’s a decent level of grip and not too much body roll, which makes the steering fairly precise. However, it crashes over harsher bumps and buzzes more on smoother roads than the softer Citroen.

It’s not a massive sacrifice to make and you could put up with the edge to the damping for the sake of the extra space, but given the family-friendly focus of these cars, the Grand C4 Picasso offers a better balance between ride and handling. 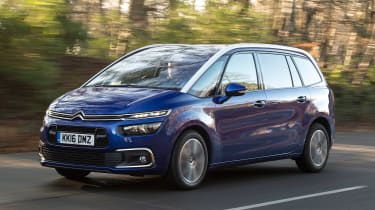 Citroen’s Grand C4 Picasso was one of the first models to use owner PSA’s versatile EMP2 platform, allowing the brand to develop something genuinely impressive in the seven-seat MPV sector.

Just like the Grand Scenic (which uses the Renault-Nissan Alliance’s CMF-CD platform that also underpins the likes of the Renault Kadjar and Nissan Qashqai), the Picasso offers plenty of space wrapped up in an individual-looking package.

Compared with the Renault, the Citroen feels even more light and airy inside, with great forward visibility thanks to the thin A-pillars.The sense of space is helped by the centrally mounted digital display, while it’s backed up by a roomier cabin than in the Grand Scenic. 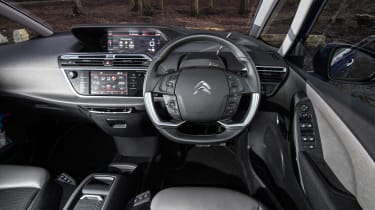 Storage is a match for the Renault, too, with drawers under the front seats, a big central bin and two underfloor compartments in the back. All three middle seats offer Isofix child seat mountings, and they slide and fold individually, giving a good level of flexibility. The Grand C4 Picasso is also surprisingly spacious in the very back row. Of course, adults will still find it a little tight, but the seating position is better than in the Grand Scenic, with more head and legroom on offer.

The 1.6 Blue HDi 120 diesel we test here in top- spec Flair trim is paired with a six-speed automatic transmission and costs £28,700. The auto is a good gearbox and helps improve refinement, but Citroen’s notchy six-speed manual is no match for the Renault’s manual unit, which has a nicer shift action. However, the manual gearbox does lower the price, with the Picasso undercutting the Renault by £1,095.

Changes are managed smoothly by the auto and it doesn’t impact on performance too much, as the C4 sprinted from 0-60mph in a respectable 11.0 seconds at our test track. In-gear pace was a few tenths behind the Renault’s, due to the Citroen’s 20Nm torque deficit, but the Picasso more than makes up for this on the road. 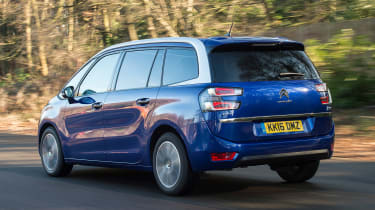 The body control isn’t quite as taut, but the Citroen floats nicely over imperfections, isolating passengers from all but the worst roads fairly well. There’s not as much grip as in the Scenic and body roll is more noticeable, but despite the softer edge to the chassis, it still retains enough composure to carry decent speed through corners.

A strong selection of equipment also makes it relaxing on long journeys, with massaging seats, sat-nav and Bluetooth fitted as standard. Climate control, keyless go and all-round parking sensors are also included, while the updated connectivity tech keeps the Picasso on the pace here. 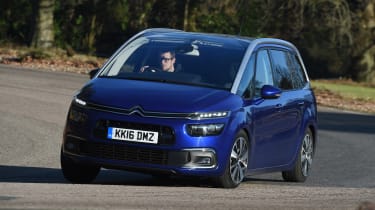 The Grand C4 Picasso retains its crown as our best large MPV. The Renault can’t match the space and flexibility the Citroen serves up, nor its frugal running costs and softer ride. It also offers more connectivity, and while it’s not as much fun to drive, it fulfils its primary brief better than the Renault. 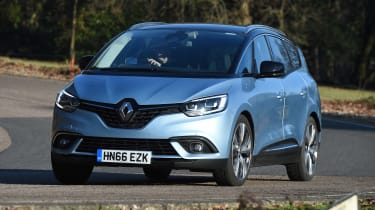 The Grand Scenic is a strong MPV that’s surprisingly fun to drive and offers some neat touches that make family life easier. But it’s not as spacious or versatile as the Grand C4 Picasso. Factor in poorer fuel economy, higher CO2 emissions and a loftier price tag, and the Renault just isn’t quite as convincing.