We drive Renault's new Grand Scenic in the UK, but how does it compare to the class-leading Citroen Grand C4 Picasso? 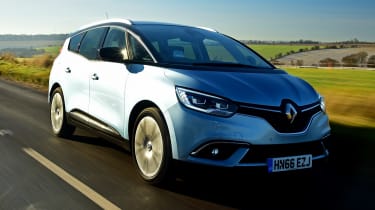 The new Renault Grand Scenic is a practical and desirable seven-seater MPV. It closely rivals the Citroen Grand C4 Picasso for style, and it’s also spacious, well equipped and cheap to run. It’s not as comfortable as its main rival, though, nor is it as refined. Still, we’re glad to see another great seven-seater MPV join the market. Not everyone wants or needs an SUV, and this is the ideal antidote.

The seven-seat Renault Grand Scenic won’t quite match the sales of its smaller Scenic sibling, but the two extra seats will make all the difference for many customers. We’ve finally had the chance to test the car in the UK, with the mid-range 128bhp 1.6-litre diesel engine.

It’s probably your best bet if you’re interested in buying a Grand Scenic, as a fuel economy figure of 61.4mpg is impressive for a car so focused on practicality and passenger space. 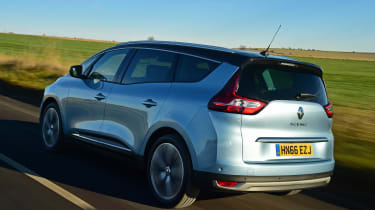 To fit those extra seats in, the Grand Scenic is 228mm longer than a Scenic, with 70mm of that coming from the extended wheelbase and the rest from the rear overhang. The third-row of seats fold down to create 596 litres of load space, but keep them in place and there’s a decent 233 litres on offer.

Folding the seats is easy thanks to the buttons in the boot that flip the backs down without fuss. Renault hasn’t given us a figure for when all five-seats are folded flat, but the space is noticeably bigger than in the standard car.

Seven-seaters often have very limited space in the third row, and the Grand Scenic is sadly no exception. While there’s about as much space as in a Citroen Grand C4 Picasso, it’s so awkward to climb into that only children will feel comfortable sitting back there. Still, the second row moves for and aft to add a bit more legroom for the kids.

Up front, however, the Renault feels just as upmarket as its main competitor, thanks to the good quality materials and cool-looking portrait-oriented 8.7-inch touchscreen. It’s not the easiest to use, but there are plenty of features. The black surround is a fingerprint magnet, but it does look upmarket when it’s clean. 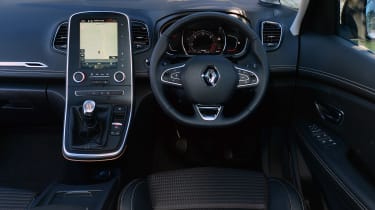 There’s plenty of storage space around the interior including a sliding centre console - useful if you’ve got a passenger in the centre seat in the middle row, who will undoubtedly appreciate the extra foot space. The front seats are comfortable, though, and should prove supportive enough on longer journeys.

As it has to accommodate those extra seats, the Grand Scenic isn’t quite as good-looking as the Scenic, which is one of the most stylish MPVs on sale. Still, the standard 20-inch wheels, flowing lines and neat light designs give the Grand Scenic plenty of flair. Only the Grand C4 Picasso can match it for style when it comes to seven-seater MPVs, in fact. 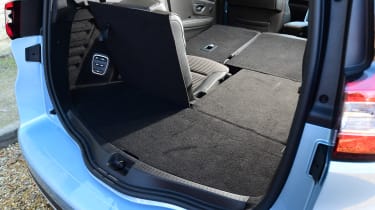 Those wheels come as standard on all cars, although Renault does point out that special tyres have been developed that should cost about the same as a normal set of 16 or 17-inch wheels on rival models. Unfortunately they contribute to an unsettled ride, with its Citroen rival being much more comfortable on UK roads - and quieter inside on the move as well.

Few owners will be too concerned about how the Grand Scenic drives, and keen drivers will still be better off with a Ford S-MAX, but the Renault isn’t too bad in the corners. It does roll a lot, as you’d expect of an MPV, and the steering is light, but it’s much more composed overall than you might expect.

The engine is a bit noisy, with a slight diesel rattle and drone in the cabin. It’s not bad enough that the radio won’t drown it out, though. The six-speed manual is a bit notchy, and while it’s not exactly fast, it can keep up with traffic without issue. That said, we haven’t been able to test it with a full family on board just yet.