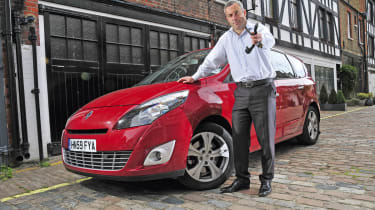 The Scenic has had a rough time over the past couple of months. In my last report in, I told you about a trip to the dealer to extinguish a warning alert on the dashboard. Apparently, this had been caused by a hefty impact from a pothole, but as there were no obvious signs of damage, the garage simply reset the ECU.

Now, though, it seems there had been a problem after all...

It came to light when my wife Tori was driving our two little ones to the child minder a couple of weeks ago. On arriving, she attempted to complete a three-point turn. As she reversed, it felt as if the wheels were spinning in gravel, even though the car was on solid tarmac. She stopped and tried again, and felt a crack beneath her. It didn’t sound good.

Next time she tried to turn the wheel, she felt a loss of control and a lack of power. So, she parked the car and called the AA, which recovered the Scenic to nearby dealer Theoco Renault in Kingsbury, North London. After a quick examination, staff reported that the MPV had experienced a steering failure caused by a broken track rod arm.

This was fixed promptly enough, but as the garage was confident the breakage was due to the earlier impact, it wasn’t covered by the warranty. As a result, it cost £336 to put right. The alarmingly bent piece of metal isn’t a known weak spot and breakages are rare, so the original impact must have been harder than I thought.

The Renault has really been in the wars, as the rear view mirror has also broken. It detached itself from the screen for the first time while our road testers were carrying out a brake assessment on a closed circuit, but the occasional speed bump has dislodged it, too. As the mirror housing hides the automatic headlamp sensor, it’s attached to a wire, so it hangs down, swinging from side to side when it pops off its mount. I’ve fixed it temporarily, but will take it back to the dealer soon to get it sorted properly.

This is unfortunate, because these problems are not really a fair reflection on our time with the Scenic, which is a comfortable and flexible family car. As I have two children under the age of three, tantrums in the back are a fact of life. With one child seat on either side of the car, access to the middle seat for a parent to calm things down and hold a hand is usually very awkward. But the Scenic’s three individual rear seats slide back and forth, freeing up legroom and making it easy for Tori or I to slip into the centreseat to restore the peace.

When rear space is not the main priority, the seats can be moved forwards to maximise the load area. You also get sliding drawers and underfloor cubbyholes, so you’re never short of places to put stuff.

Our long-term Grand Scenic edged out the Peugeot 5008 to record a narrow twin test victory too, so these travails don’t tell the whole story. I just hope the council repairs the roads as quickly and efficiently as the local Renault dealer fixed our people carrier.

“Judging by its fuel economy, our Renault is spending too long in gridlocked London. A few long runs will see an improvement on our 37mpg figure, even when the Scenic is full of family gear.”Graeme Lambert Road tester