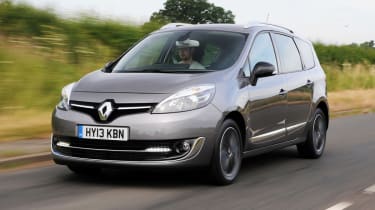 This really isn’t much of an update, with the changes mostly limited to the way the Grand Scenic looks rather than drives. The modern styling is a welcome update, but what this facelift mostly proves is that the car didn’t need much tweaking. It’s comfortable, spacious and cheap to run, with a better value price than most of the competition.

With its second facelift in as many years, Renault can’t be accused of forgetting about the Grand Scenic. But are these minor changes enough to fend off all-new rivals like the Kia Carens?

Most of the tweaks this time around are cosmetic, and are a welcome update to a car that was beginning to look a little frumpy compared to the competition – especially the outlandishly  styled Citroen C4 Grand Picasso.

The gloss black grille and sharper headlights help to create a modern look outside. And the dual-colour 17-inch alloys, chrome accents and tinted windows are all part of a new Bose+ package (£1,000) that includes a nine-speaker Bose sound system.

There is a new stop/start-equipped TCe petrol engine in the updated range, but we drove the 1.6-litre dCi 130, introduced as part of the last facelift. It’s smooth and quiet, and while you have to be careful  not to let engine revs drop too low, it can be pretty punchy once you get used to where the power is, as revealed by its 0-62mph time of 11.1 seconds.

That refined engine makes the Grand Scenic a really relaxing car to drive, and there’s not too much wind or road noise in the cabin, either. Comfortable suspension only adds to the  family-friendly credentials.

There’s little in the way of fun, though – this facelift has done nothing to up the level of  involvement on offer. The car has plenty of grip, but the vague  steering and neutral handling never make you feel a part  of the action in the same way a Ford Grand C-MAX can.

The cabin could do with more of a refresh, too, as it’s beginning to look dated. The sat-nav is  controlled through an awkwardly placed joystick, and some of the radio controls are confusing.

But at least the interior is extremely practical. Boot space with all seven seats in place is 208 litres, but you can fold them into the floor and remove the  second row of seats to free up a seriously impressive 2,063 litres.

So the Renault ticks a lot of boxes, and with 64.2mpg, it should be cheap to run. The £24,395 price seems a bit steep, but is a few hundred pounds cheaper than a comparable Carens or Grand C-MAX.

It doesn’t have the Kia’s seven-year warranty or the involving drive of the Ford, but the Grand Scenic remains comfortable, practical and good value family transport.