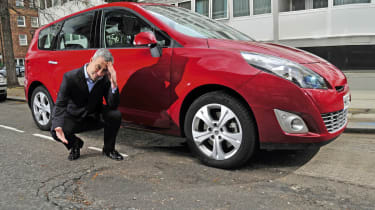 It seems potholing has become the latest craze to sweep the UK. However,  I’m not talking about crawling through caves and underground crevices, but the task of driving on Britain’s crumbling tarmac. The recent cold snap left roads pitted and scarred, meaning I’ve had to be extra vigilant to avoid driving our Scenic into any wheel-destroying craters.

I’ve generally been successful, except for a couple of impacts on unfamiliar territory. On one of these occasions, the hole was deep enough to send a severe shock through the French car’s cabin. Fortunately, there was no physical damage, although the ESP warning light flashed on along with a warning to have the kit checked out. A trip to my local Renault dealer was on the cards.

Given the firm’s consistently poor scores in our annual Driver Power survey, my expectations were low. So it came as a pleasant surprise when I discovered the staff at Theoco Renault in Kingsbury, north London, were extremely friendly and helpful. Better still, the only repair necessary was a reboot of the software controlling the valuable electronic safety gear, which only put the car out of action for a day.

Apart from this minor glitch, our MPV has been performing faultlessly as a versatile family hold-all. In fact, the comfortable and refined Renault is perfect transport for the latest addition to the Burnay household, four-week-old baby girl Sascha. The standard ISOFIX fittings make slotting her car seat in a doddle, the large boot easily swallows her pram, while the Scenic’s raft of safety features brings peace of mind.

The new arrival has meant a few trips up and down the country to visit family and friends. On these journeys, I’ve come to appreciate the car’s standard fit cruise control, particularly on the many sections of motorway that have been restricted to 50mph. However, while the steering wheel-mounted controls are intuitive, the button that switches between the cruise and speed limiter functions is awkwardly hidden away at the base of the gearlever.

I’m also a little disappointed with fuel economy of 32.1mpg, which is a long way short of Renault’s claim of 50.4mpg. But these are my sole niggles with an excellent package. In fact, the only real improvement would be the fitment of a pothole detector....