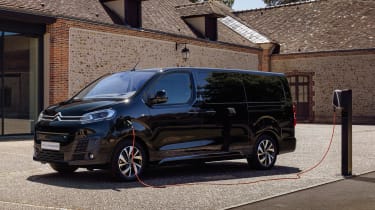 This is the new, all-electric Citroen e-SpaceTourer. It will follow the e-Dispatch panel van into the showrooms in October as the French brand’s first all-electric minivan, acting as a rival for the recently unveiled Volkswagen ABT e-Caravelle.

It’s based on the same EMP2 platform as the combustion-engined SpaceTourer and, like the recently unveiled Citroen e-Dispatch, it’s powered by a front-mounted electric motor with an output of 134bhp and 260Nm of torque, supported by a 50kWh battery pack.

The powertrain comes with three drive modes. Eco mode limits the motor’s output to just 80bhp and 190Nm of torque to maximise the battery’s range. Normal mode ups performance to 107bhp and 210Nm, which Citroen says is suitable for everyday driving – while Power mode unlocks the motor’s maximum performance.

Citroen says the e-SpaceTourer’s powertrain has a maximum range of 143 miles between charges – and, when plugged into a domestic 7.4kW wallbox charger, its battery pack will achieve a full charge in less than eight hours. When plugged into a 100kW rapid charger, the system will recover an 80 percent charge in around half an hour. 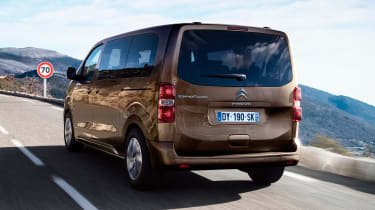 Also, as the battery pack is mounted under the vehicle’s floor, the e-SpaceTourer shares the same level of practicality as the combustion engined model. There’s still space for up to nine passengers across three seating rows, while the five-seat model’s boot is 100 litres larger than the diesel variant’s, with a maximum capacity 2,381-litres.

UK buyers have their choice of two trim-levels. Feel specification offers seating for up to eight passengers and sliding runners for the second and third seating rows. Taxi and shuttle bus firms can opt for Citroen’s Business trim, which adds an extra seat up front and tinted rear windows.

Both models also come with a seven-inch touchscreen infotainment system, which features fresh graphics that display the EV’s energy flow and electricity consumption, as well a new menu to configure the van’s charging schedule and thermal pre-conditioning system.

There’s also an extensive range of driver assistance technology, including hill start assist, a driver attention alert, a blind-spot monitoring system, a reversing camera, a collision risk warning sensor and a head-up display, which Citroen says is unique to the segment.

Click on the picture below to view the best electric cars on sale right now... 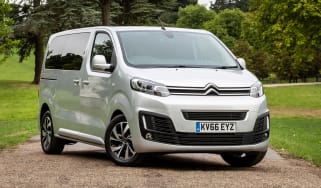