A full buyer's guide for the Morris Minor (1948-1971) including specs, common problems and model history... 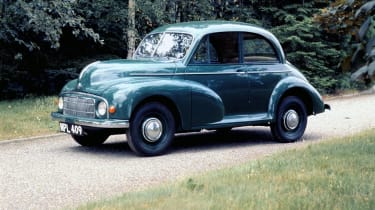 The Morris Minor made its debut way back in 1948, yet there’s no sign of its appeal diminishing. If anything, its popularity grows ever stronger. A combination of practicality, charm, usability and affordability all conspire to ensure the Minor is near the top of many classic buyers’ wish lists – throw in superb club and specialist support, and it’s easy to see the Minor’s enduring appeal.

Whether you’re a long-standing classic owner or you’re looking for your first golden oldie, few cars fit the bill better than a Minor. Full of charm, universally recognised and admired, plus easy to upgrade for everyday use, this is one of the most practical cars ever created.

However, despite a cult following, the Minor remains eminently affordable – if you’re already tempted, there really is no good reason to put off buying one. If you’re after something to punt down a country lane at high-speed, then you’d be better off looking at a classic Mini Cooper, but for a bit of fun and usable cruising around time, then the Minor is almost unbeatable.

Which Morris Minor to buy?

Side-valve Minors are rare and they’re hard-going too, thanks to the lack of power. For some though, seeking out an early car represents something more of a challenge, especially where finding parts and restoration is concerned. As the rarest and oldest examples of this iconic classic, the ‘low light’ cars are also the most valuable.

However, the 1098cc edition is the most usable, as it’s the most powerful so most easily able to keep up with modern traffic. However, the earlier cars with their split windscreens have more charm and are more sought after – so they’re more valuable than later cars.

Establishing which bodystyle you want is probably easy; the Traveller is a capacious estate, while the Tourer is a fabulous convertible – even the saloon is full of charm. Many Tourers started out as two-door saloons and while properly converted cars are perfectly safe, some are complete death traps. The main thing is to be sure of what you’re buying, as some are passed off as genuine when they’re not.

Looking for some extra power? The 1275cc A-Series engine is the most common, and in-keeping upgrade. While A-series upgrades are generally the most popular way of freeing up extra power today, transplanting a Rover K-Series was for a time extremely popular.

This very modern engine requires quite a lot of work to install, as well as suspension and brake upgrades to keep everything under control, but if you are interested in building a mildly hot-rodded Minor, then this is perhaps the easiest and cheapest route. Fiat Twin-Cam conversions used to be quite common as well, although kits are no longer available and engines are more difficult to source.

Other upgrades worth seeking out include a Ford Sierra five-speed gearbox which is much stronger than the original, while telescopic dampers at the front are worth having too, along with a front anti-roll bar, which transforms the handling.

• Bodyshell: a Minor’s value is in its bodyshell, but things can look fine when the car is barely roadworthy. Corrosion usually starts on the inside and eats its way out, so any signs of bubbling could be potentially disastrous. All panels are available to repair the most rotten of bodyshells – but if much work is needed, doing so won’t be economically viable.

• Corrosion: rust traps include rear spring hangers which are a pain to fix. The underside can rot badly along with the sills and door bottoms.

• Wood: if you’re looking at a Traveller, make sure the wood isn’t rotten, as it’s structural. If there’s any significant rot present, the whole lot will need to be replaced and the job can’t be tackled in sections.

• Exhaust: blue exhaust smoke and an illuminated oil pressure warning light signify an A-Series engine needs a bottom-end rebuild. There will also be plenty of knocking from the bottom end, especially when the engine is started up, but rebuilds are easy and relatively cheap to undertake.

• Gearbox: the gearbox is the Achilles’ heel, with parts supply poor for all cars other than the 1098c edition; split-screen parts are especially rare. No Minor got synchro on first, but there shouldn’t be any jumping out of gear, whining or rumbling; any of these mean a rebuilt transmission will be needed soon.

• More gearbox: gearbox parts for 1098cc cars are plentiful, which is why some owners simply fit a later box to their early car. An MG Midget gearbox is the same as the Minor’s.

• Clutch: the rest of the transmission usually gives few problems, although the clutch has a finite lifespan. Check for slipping; a three-piece kit is cheap and DIY fitting is easy.

• Suspension: the primitive front suspension needs fresh grease every 3000 miles, or the kingpins wear out. The rear suspension is even more archaic; check for leaking lever arm dampers, although many cars have been converted to telescopic dampers by now.

1949: Headlamps moved to top of front wings, initially for the North American market only.

1950: Four-door saloon is introduced, for export markets only.

1952: Series II cars arrive, with 803cc power; it’s a result of BMC being formed from Morris and Austin merging.

1953: MM production ends, then a van and pick-up appear, along with the Traveller.

1954: Series II gets a facelift, with revised dash plus a new grille and lights.

1961: Just 350 Minor Millions are built, to celebrate the millionth Minor leaving the factory.

1963: There are fresh front and rear lights.

1964: All Minors get better seats and heating plus a revised dash.

1974: Production of the Minor ends in New Zealand.

If you’re not worried about originality, and just want something fun to pootle around in, then you won’t struggle to find a suitable Minor for sensible money. £1650 is the entry point for a rough but road-going Minor 1000, with a great example coming in at around £6000.

Traveller and Convertible prices are around 50 per cent extra. Series 2 models are marginally cheaper, but prices generally depend more on condition than anything else. There are many arguments for originality vs usability, but the good news is there are plenty of cars to choose from, from completely authentic cars without so much as electronic ignition, right through to V8-powered hot rods.

It all depends on what you’re after. There’s also a huge number of specialists offering parts to help keep cars on the road, and improve usability along the way. The most valuable models are the earliest Minor Series MM cars. The so-called low-light examples – compete with headlights mounted in the grille – have been known to sell for more than £10,000 in perfect condition.