Chevrolet’s 744bhp flagship loses its roof, and is the first convertible ‘Vette to wear the ZR1 badge since the 1970s 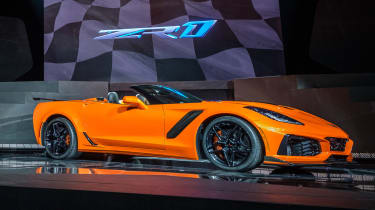 Only a few weeks after Chevrolet pulled the wraps of its new Corvette ZR1, the American manufacturer has unveiled a soft-top version of its flagship sports car at the LA Motor Show.

Chevrolet hasn’t had to make any structural changes to the aluminium body to accommodate the folding roof, which is electronically controlled and it can be operated at speeds of up to 30mph. Only 27kg has been added to the weight of the Convertible, which comes down to the folding mechanism. 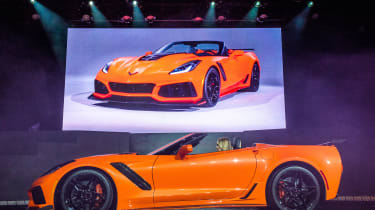 Under the skin it uses the same 6.2-litre supercharged V8 producing 744bhp and 969Nm of torque. It’s paired with Chevrolet’s new eight-speed semi-automatic gearbox, and capable of 0-60mph in less than three seconds. Flat out Chevrolet says the ZR1 convertible can hit 212mph.

Which would you have: the hard-top or the convertible Corvette ZR1? Let us know in the comments!