The Dodge looks striking, build quality is poor and it is expensive. 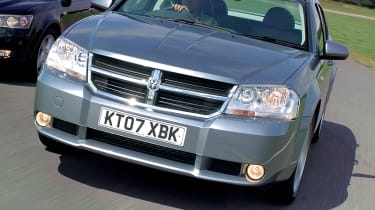 Driving The Dodge is no sports car, but it’s reassuring and deals well with quick changes in direction. It’s also composed over rough surfaces, while the steering is nicely weighted. Two engines are offered, but we’d avoid the disappointing 2.4-litre petrol, and go for the Volkswagen sourced 2.0-litre diesel. It offers good low-down power, and vibration is well contained. It is, however, far from refined and sounds coarse at both idea and on the move. It’s quick, though, with good acceleration figures and strong in-gear pace. It pulls well from low speeds as well, and the six-speed gearbox is slick.

Marketplace Dodge is hoping its muscle car heritage will help it gain a foothold in the competitive large family car sector. The Avenger is boldly styled, with oversized dimensions including that bulky rear haunch. It’s a big car – longer than Ford’s Mondeo – and the oversized appearance gives it a really robust appearance. There are two trim lines, and both are lavishly trimmed: the SE has ESP and climate control, with the SXT adding full leather. Prices for the five-door hatch are on a par with the Ford Mondeo and Vauxhall Vectra, though it’s a more natural rival for the Hyundai Sonata and its sister car, the costlier Chrysler Sebring.

Owning The Avenger’s interior is an expanse of hard, grey plastic, while the finish smacks of lacklustre workmanship. It’s neat and well laid out, though, while the driving position is good. Legroom isn’t quite as ample in the rear, but it’s accommodating – unlike the boot, which is also hampered by a narrow opening. Rear visibility is restricted as well. As for economy, it’s acceptable if you go for the diesel – the petrol is poor, particularly with the optional auto gearbox. Retained values aren’t great either, and overall, you have to consider the Avenger poor value when compared to some of its rivals. Against a Ford Mondeo, there’s no comparison. 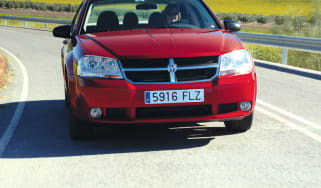