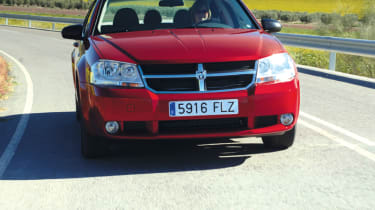 While it's no class leader, the Avenger is certainly worth a second look. A decent engine, coupled with a host of safety features and a reasonable price tag, help boost the car's appeal. Ultimately, though, the forthcoming fourth-generation Ford Mondeo still looks certain to steal the family class show, particularly so when it comes to cost, as it's also expected to be available at £15,000 for an entry-level model.

Can Dodge muscle in on the territory owned by Ford and the Mondeo with this daring-looking saloon? The US manufacturer seems to think so, and is hoping that the Avenger's radical styling will carve a new niche in this competitive category, much like Chrysler's 300C before it.

On first impressions, this appears a realistic enough target. Sharing a chassis and engine with the all-new Chrysler Sebring, which goes on sale here in June, the Avenger is charged with injecting some excitement into the family saloon market.

Its sweeping, curved roofline, sporty spoiler and raised haunches certainly turn heads, and provide the car with an unmistakably American stance. But go to the front and the protruding bumper, similar to a sulky bottom lip, really lets the newcomer down.

If that's not enough to put prospective buyers off, the cabin quality almost certainly will. Step inside and you're confronted with a vast expanse of cheap, grey plastic - an unforgivable feature in this demanding sector.

Front seat passengers get by far the worst deal, as this is more or less all there is for them to look at. At least the driver's view is interrupted by a semi-respectable instrument panel.

There are some excellent features on the standard equipment tally, though. The Chill Zone, a cubbyhole for storing and cooling up to four canned drinks, is a really neat addition. As is a front passenger seat that folds flat, improving practicality.

Among the options is the firm's MyGIG entertainment system which, when coupled with sat-nav, provides touchscreen access to music, photos and maps. Its 20GB hard drive stores up to 1,600 songs or pictures.

The system also comprises handsfree Bluetooth technology connected to switches mounted on the steering wheel. But the kit isn't cheap, adding £1,500 to the overall price. Another interesting feature is the wipe-clean fabric used to cover the seats. Dodge says the special easy-care, soil repellent and anti-microbial textile is exclusive to DaimlerChrysler models, and is a practical choice for families, even if it looks and feels a little cheap.

From behind the wheel, the narrow A-pillars mean there's good visibility at the front, but a plastic panel covering a section of the rear windows makes the C-pillars seem unusually large. That, coupled with an absence of parking sensors, means it's tricky to reverse into a tight spot.

The 2.0-litre turbodiesel engine in our model, sourced from VW, packs enough punch to power the Avenger effortlessly along the motorway, providing plenty of torque (310Nm at 1,750rpm). But it was a little sluggish pulling away, and really only came into its own in the higher gears.

Refinement is poor, and the Avenger wasn't as quiet as we had hoped. However, out on smooth, open roads, the big saloon handled respectably enough, with a comfortable ride and nicely weighted steering.

The question is, will this be enough to unseat the likes of the Ford Mondeo or Volkswagen Passat from the top of the UK's sales charts? Not in our opinion. While the Dodge is certainly pleasant enough when travelling long distances, it simply lacks the polish to stage a genuine challenge to its better-engineered and far more luxurious contenders from Europe.

The Avenger is going to have to work a little bit harder than was originally expected if it wants to close the gap on its rivals.