Every new DS car to be electrified by 2025 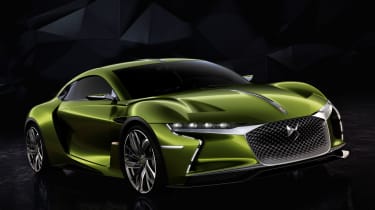 From 2025 every new model launched from DS will feature only electrified powertrains, the luxury French brand has confirmed. It means that within the next seven years DS will exclusively sell models using either hybrid or fully electric power, or both.

Yves Bonnefont, DS boss, announced the news, stating “Our ambition is very clear: for DS to be among the global leaders in electrified cars in its segment.” Bonnefont confirmed the brand’s plans news at the french round of the Formula E championship - a series that DS has competed in since its inception in 2014, and one that it is keen to emphasise as a benefit to its road car plans.

The electrification rollout with start with the DS 7 Crossback E-Tense 4x4. A 1.6-litre turbocharged petrol engine will be supported by a pair of electric motors - one for each axle - for a system output of 296bhp. This’ll make it comfortably the most powerful version of the firm’s Audi Q5 rival, but the claimed 30-mile electric only range means that it could potentially be the most frugal too.

A zero-emissions version of the next DS 3, which will also spawn an SUV variant, is expected to be the brand’s first fully electric model. It’s likely to make its public debut at this year’s Paris Motor Show in October.

What do you think of the DS plan for full electrification? Let us know below...